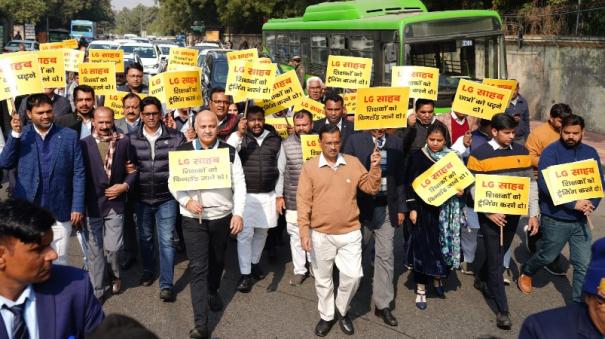 Delhi government schools were planning to send teachers to Finland for training. It is said that Lieutenant Governor VK Saxena intervened and protested against this decision of the state government. The divorce is being talked about in political circles as the latest in a series of tussles between the governor and the chief minister.

In this situation, Aam Aadmi Party MLAs led by Chief Minister Arvind Kejriwal marched towards the Governor’s House on Monday to protest the Governor’s interference in the decision of the Delhi government. The rally took place after the Delhi Assembly was adjourned for the day today.

Addressing the media before the rally, Delhi Chief Minister Arvind Kejriwal said, “This government is the government elected by the people of Delhi. This is the money of the tax payers of Delhi. It is being spent on the education of Delhi. What is the problem with the Governor?

It is unfortunate that the Chief Minister and the MLAs had to march towards the Governor’s House. I hope the Lt. Governor will realize his mistake and allow the teachers to go to Finland,” he said.

The MLAs who took part in the rally carried placards and chanted “Lieutenant Governor, allow school teachers to go to Finland for training”.

As the rally approached the Governor’s House, a statement issued from the Governor’s House said, “Any statement is liable to be misinterpreted. The government has been advised to evaluate the overseas training program for school teachers based on the change it will bring to the quality of education of the students and examine its costs. It has also been advised to examine the benefits of the programs that have gone abroad for training in the past,” it said.

Earlier, Aam Aadmi Party MLA Saurabh Bharadwaj had proposed a debate in the Assembly on “Unnecessary and illegal interference in education of school children and training of teachers”. And slogans like “Let teachers go to Finland”, “Allow teachers to train”, “Let poor children study” were raised in the assembly.

Following this, Aam Aadmi and BJP MLAs had a verbal dispute. Thus they were adjourned for the rest of the day. It was the first day of the three-day session of the Delhi Legislative Assembly, which continued to adjourn. It is noteworthy that they did not take place continuously for even ten minutes.