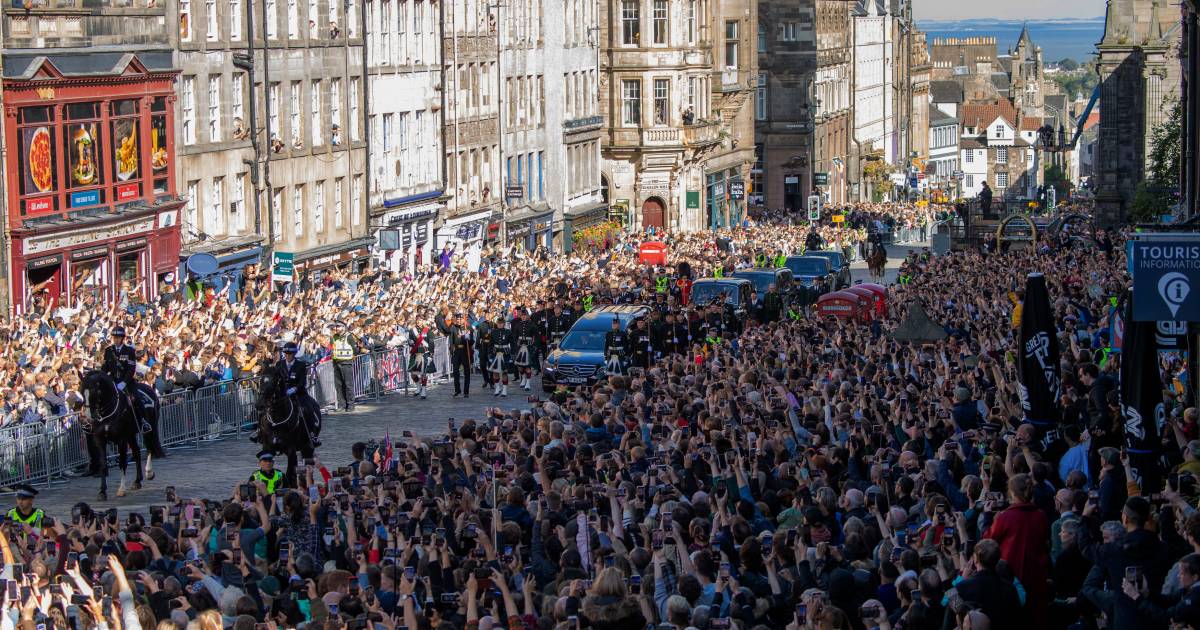 The funeral procession of the Queen’s hearse from Holyroodhouse to St Giles’ Cathedral is regarded as a dress rehearsal for the state funeral in London, the largest security operation ever to take place in the United Kingdom.

Behind a crush barrier opposite the Palace of Holyrood, a woman from Stirling has to chuckle at the police force. “Where I live, the office closed its doors,” she says, while the hearse, followed on foot by King Charles III, among others, drives past at a walking pace. “I feel safe here.” Security around the Edinburgh procession is dwarfed by the operation surrounding the funeral in London. Even the elite troops of the SAS are deployed.

Plainclothes officers mingle with the crowd in the Scottish capital on Monday morning. One duo is easily recognizable on Canongate. The tallest of the bunch wears shorts, brand new Nike running shoes, an Under Armor backpack and a New York Yankees baseball cap – an unintentional nod to British customs officers who take travelers with such headgear straight out of the queue.

The duo moves so fast that their earphones with microphone are barely noticeable. They are in contact with the checkpoint that can direct snipers if desired. Four of them lurk on the roof of Holyrood, the Scottish Parliament. Out of sight of the people along the route over the Royal Mile, dozens of such units are watching closely through a visor.

The street cops, positioned in strategic places in the city, deviate from the norm in Edinburgh. Scottish officers are a minority. Accents from southern England, the Midlands and Yorkshire predominate. In the run-up to the state funeral in London, the mix will be many times greater. The London Metropolitan Police is supported by forces across the country. In total, about ten thousand police officers are being summoned.

The procession to St Giles’ Cathedral and the chance to walk past the coffin counts as a dress rehearsal in that sense. The rush will be huge, but dwarfed by the London rush. Chief Commissioner Mark Rowley expects a million visitors to Westminster Hall, where Elizabeth II will be from Wednesday afternoon. The funeral, conservatively estimated, may attract double the number.

Added to the many dignitaries, including almost certainly King Willem-Alexander, the British capital faces the biggest job ever. A no-fly zone, 1,500 soldiers and support from the security services MI5, MI6 and GCHQ must manage ‘London Bridge’, the code name for the operation surrounding the death of the Queen.

The conduct in Edinburgh showed that the extreme surveillance of a mega-event doesn’t have to be fraught with grimness. Those who queue for five hours to view the coffin – in London the waiting time is estimated at 30 hours – can go to the toilet and get water.

Watch all our videos about the death of Queen Elizabeth here: