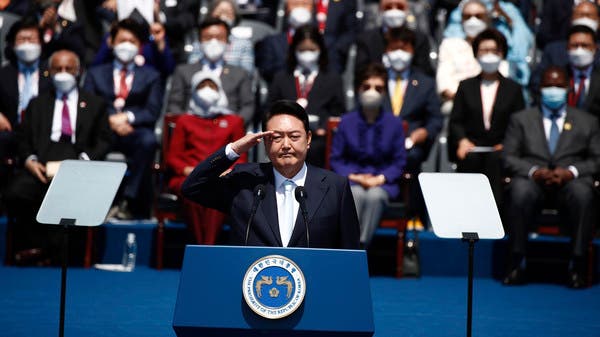 Yun promised his northern neighbor that if it “actually engages in the complete denuclearization process”, it will present a “bold plan” to boost its economy.

Governor Yoon Seok-yeol was sworn in as South Korea’s president for a five-year term, in a huge ceremony held at the National Assembly Square in the capital, Seoul.

“I swear before the people that I will faithfully fulfill the duties of the president,” said Yoon, 61, who assumes the presidency at a time when relations with the North are very tense.

Yun promised his northern neighbor that if it “actually engages in the complete denuclearization process”, it will present a “bold plan” to boost its economy.

In the first minute of his official term beginning at midnight Monday-Tuesday, Yoon, as Commander-in-Chief of the Armed Forces, received his first briefing from the Armed Forces Staff in a fortified underground room at the State Crisis Management Center at the Presidential Palace in Seoul.
“Today, we are facing multiple crises,” he added, including the COVID-19 pandemic, supply chain problems and global conflicts that “cast a shadow over us.”

Yoon was a former attorney general who was up to date with politics and was elected president in March after winning by a narrow margin over his opponent and with a popular support of barely 41%, one of the lowest rates in the history of South Korean democracy.

During his election campaign, Yun called North Korean leader Kim Jong-un a “rude boy” and vowed to his constituents to “teach him good behaviour.”
North Korea pre-empted Yun’s inauguration ceremony with a new missile test it conducted on Saturday, during which it launched a sea-to-ground ballistic missile.

This was the fifteenth test this year for the nuclear-armed state, which launched in March, for the first time since 2017, an intercontinental ballistic missile.

The United States has warned that Pyongyang could resume its nuclear tests in the coming weeks.

For five years, former South Korean President Moon Jae-in pursued a policy of dialogue with Pyongyang, but Yun saw this “submissive” approach as a complete failure.