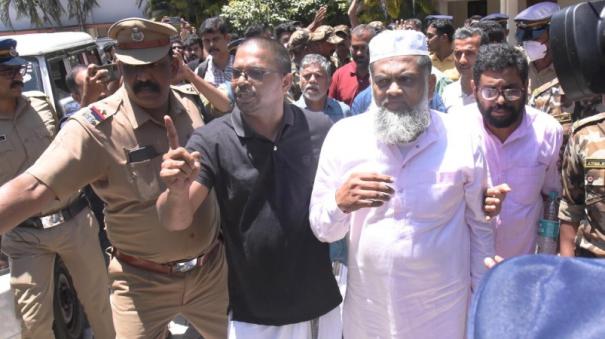 Cochin: A special court yesterday ordered 11 PFI operatives arrested under the Unlawful Activities Prevention Act (UAPA) in Kochi to be sent to NIA custody till the 30th of this month.

On the 22nd, the National Investigation Agency (NIA) conducted raids in 15 states including Tamil Nadu, Kerala and the houses of the PFI office and executives. A large number of documents were seized during the raid. 45 people were arrested. Cases were registered under the UAPA Act against 13 arrested BFI activists in Kerala. All of them were produced before the special NIA court in Kochi yesterday. A petition was filed on behalf of the NIA in the special court that they should be sent to custody for further investigation. Accepting this request, the court ordered the 11 members of the BFI to be sent to NIA custody till September 30. The special NIA court ordered to produce them again on September 30 after the remand.

The BFI activists raised slogans when they were produced before the NIA special court in Kochi yesterday. The court strongly condemned their chanting in the court premises.

In its report filed in court, the NIA said: Kerala BFI has encouraged Muslim youth to join terrorist movements like Lashkar-e-Taiba, ISIS and Al-Qaeda. And they have conspired to establish Islamic rule in India. They conspired to engage in illegal activities to create enmity between different religions and groups.

Misrepresenting the policies of the government to a certain section of the people and inciting hatred against India.

Documents seized from them revealed that a hit list was prepared targeting leaders belonging to a particular community. This is what NIA has said.