Serena retires in tears – From a struggling career to 39 Grand Slams.. 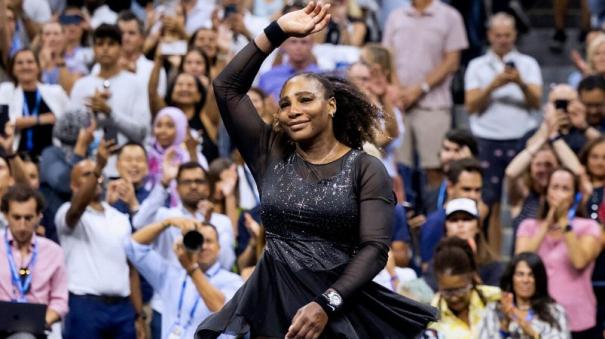 New York: After losing in the 3rd round of women’s singles at the US Open, American Serena Williams tearfully retired from international tennis.

Serena Williams takes on Australia’s 46th-ranked Ajla Damjanovic in the women’s singles third round of the US Open in New York City. Serena Williams lost 5-7, 7-6, 1-6 in this match which was held in 3 hours and 5 minutes.

Serena Williams retired from tennis with this match. 41-year-old Serena’s 27-year tennis career ended with this. At the end of the match, Serena thanked the tearful fans and expressed her love for them by clapping her hands in the shape of a heart. Serena Williams says, “I’m still talented. But sport requires more than that.

As a mother I am ready to do my duties. The tennis journey was unbelievable in my life. Technically I am still young on the world stage. I like to live life as it goes. I have a bright future ahead of me. I don’t think retirement should be considered. But don’t know what will happen.

The reason I’m here as Serena is because of my sister Venus. I wouldn’t have been Serena without her. So I want to thank Venus at this time. It all started with my parents. I will always be grateful to them. I think there are tears of joy in my eyes right now. This is the happiest journey of my life,” he said.

One of Serena’s half-sisters, Yatun Daprins, was shot and killed by a gang in their hometown of Compton in 2003. He was Serena’s personal assistant for a long time.

After winning Wimbledon in 2010, Serena cut her foot in a hotel in Germany. As a result he required 2 surgeries. It took him 20 weeks to get up and walk. And in 2011, a blood clot in his lungs threatened his life. He missed 3 major matches due to this. He was absent from the field for a year.

Having won 23 women’s singles titles, Serena would have equaled Margaret Court’s record for the most Grand Slam titles in women’s tennis history if she had won one more Grand Slam title. But despite struggling for the last six years, Serena could not equal that record. Serena last won the Australian Open in 2017. Since then he has played in the finals of four Grand Slam tournaments without winning.

Serena Williams was born on September 26, 1981 in an American black family. He made his professional tennis debut in 1995. In the next 7 years i.e. in 2002 she became world number 1 tennis player.

Who is this Ajla…

Australia’s Ajla Damjanovic, who beat Serena, has never won a single trophy on the WTA stage. The 29-year-old has never made it past the quarter-finals of a Grand Slam. Now she is the last player to beat Serena.

Michelle Obama, wife of former US President Barack Obama, tweeted: “Congratulations to Serena on her amazing career, we are lucky to have watched a young woman from Compton grow into one of the greatest athletes of all time.”