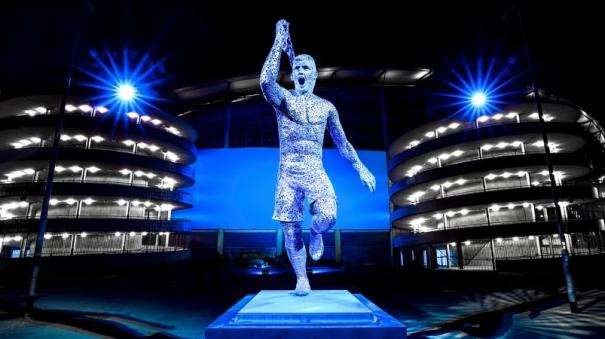 Manchester: The team has installed a statue of Sergio Aguero, one of the best players on the Manchester City football club team. It has attracted attention among football fans.

Sergio Aguero is a football player from Argentina. He played for Manchester City from 2011 to 2021. Aguero has scored a total of 184 goals for the team. Apart from that he has scored 41 goals for Argentina. If his name is mentioned, the goal he scored in the last match of the 2011-12 Premier League series will come to mind immediately.

That goal is famous to that extent. Exactly ten years ago on the same day (May 13, 2012) Aguero scored that goal. He scored the goal in the 93:20 minute of the match. Manchester City won the title for the first time. To celebrate, Aguero undressed and rolled up his sleeves on the field. It was an unforgettable celebration by every one of the fans of that team.

Now Manchester City has installed the statue as if it had just filmed that moment of celebration. The statue is made of stainless steel at the Etihad Stadium, which is considered the team’s home ground. It was designed by award-winning sculptor Andy Scott. The statue was unveiled before the team’s executives.