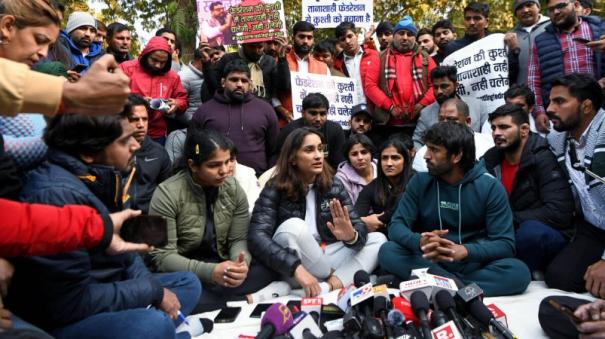 Delhi: Female wrestler Vinesh Phogat is protesting for the resignation of the president of the Indian Wrestling Federation.

Vinesh Phogat is the first Indian woman wrestler to win gold at the Commonwealth and Asian Games. The allegation raised by him yesterday has caused shockwaves in the Indian sports world. Female wrestlers have been on the prowl for years claiming they have been sexually harassed by their coaches.

His Olympic medalists Sakshi Malik and Bajrang Punia are also protesting in Delhi’s Jandar Mantar area. Before joining the protest, Vinesh Bhogat said in an interview, “I know about 10-20 women wrestlers facing sexual harassment. This includes many coaches and referees. We will continue the protest until the culprits are punished. Till then no athlete will participate in any event.

Coaches sexually harass female players, and some of the federation’s favorite coaches also misbehave with female coaches. Girls are sexually harassed. Wrestling Federation of India (WFI) president Brijbhushan Charan Singh has also been accused of sexual harassment. They (Confederation) also interfere in our personal life and disturb us. They are exploiting us. When we went to the Olympics, we didn’t have a physio or a trainer. “We are constantly being threatened for raising our voices against it,” he complained.

Also, the Wrestling Federation of India (WFI) has announced that it will go on strike until its president Brijbhushan Charan Singh steps down. 30 wrestlers have participated in the protest with him.

But Brijbhushan Charan Singh denied the allegation, saying, “97 percent of the players are on our side. I am pained by the allegations of sexual harassment. No player can level those allegations on me or the head coach. I think some wrestlers are being pressured to sit on dharna. A few days ago , in a meeting, Vinesh Phogat demanded that the head coach be replaced. A coach cannot be retained on the recommendation of a player. We should also think about the players of other states. They should have been told earlier along with the names of the coaches involved in sexual harassment. If their allegations are found to be true, I will commit suicide.” stated.

However, following Vinesh Bhogat’s allegations, the Central Sports Department has sought an explanation from the WFI.