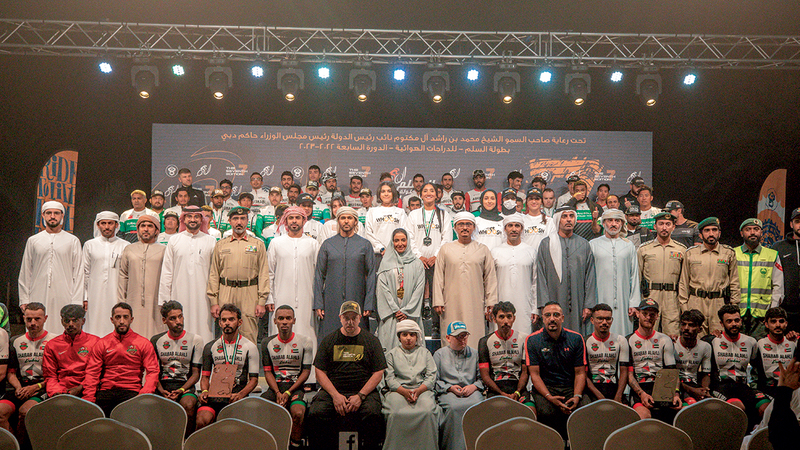 The cyclist of the Croatian Al-Ahly youth team, Fran Milovic, won the first place in the elite race for men that took place yesterday, within the Peace Cycling Championship, which is organized by the Office of His Highness Sheikh Mohammed bin Rashid Al Maktoum, Vice President and Prime Minister of the UAE and Ruler of Dubai, for purchases and financing, to win an award. A financial amount of 200 thousand dirhams.

The race, which extended for a distance of 172 km, was strong, with the participation of 246 international, Emirati and Gulf cyclists, who wore the shirts of 40 teams and held the nationalities of 37 countries. It records the history of Dubai and embraces Sheikh Saeed’s House and the Saruq Al-Hadid Museum, passing through many modern Dubai landmarks, including the Infinity Bridge, Port Rashid, the Union Museum, the Museum of the Future and many others, all the way to the finish line in Al Qudra District.

The championship shield was also presented to the supporting entities and participating Gulf federations.

He said in a press statement: «This continuous support always motivates us to present the new and distinctive in every race, and the novelty of the seventh edition was the distinguished track for the elite race, which conveyed to the world a wonderful picture of Dubai’s rich history and its brilliant present through the passage of riders in various regions».

He added: «The participants in the race, including world champions, our Gulf brothers, and the people of the Emirates, enjoyed participating and passing through these wonderful areas that were included in the track. Beautiful about the splendor of the race and the place, as well as the splendor of the weather within (the most beautiful winter in the world)».

• “The race conveyed to the world a wonderful picture of Dubai’s rich history and brilliant present.”

Al-Obaidly: The Peace Championship contributes to introducing culture and heritage

Acting Director of Al Shindagha Museum, Abdullah Al Obaidli, stressed the importance of hosting the assets of “Dubai Culture” for the launch of the third race of the seventh season of the Peace Cycling Championship, and said: “Our hosting of the tournament reflects the importance of the house of Sheikh Saeed Al Maktoum, which is located in (Al Shindagha Historical Neighborhood). Prominent and remarkable presence in the local memory, as the “historical neighborhood” is a witness to the qualitative stages and leaps that Dubai has achieved over the past decades.

Al-Obaidli added, “This hosting comes within the framework of the partnership relations that bring together (Dubai Culture) with other government agencies and institutions, aimed at strengthening Dubai’s position on the international map as a global sports and cultural destination in light of the emirate’s achievements through its hosting of international sports and cultural events.” Pointing out that the tournament contributes to introducing culture and raising awareness of local heritage.