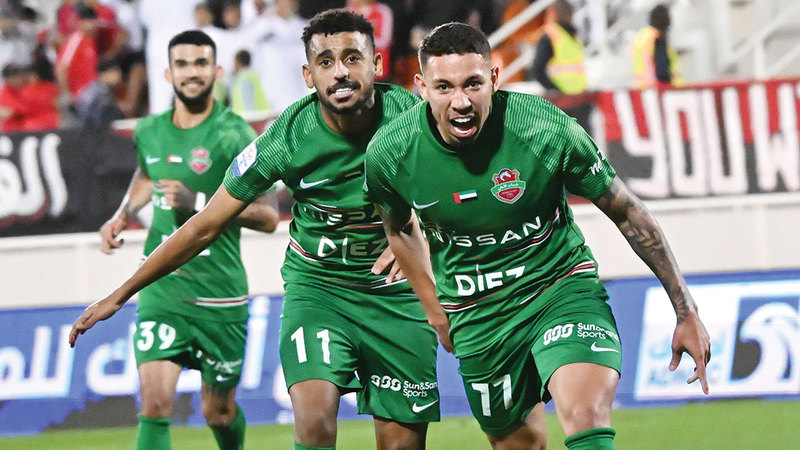 Shabab Al-Ahly regained the top spot in the ADNOC Professional League standings by defeating Ajman by three goals to one, yesterday, in the 13th round at Rashid bin Saeed Stadium in Ajman, to raise the “Dubai Knights” score to 28 points, crowning itself as the winter champion, ahead of Sharjah, who finished second with a score. 27 points, while the “orange” balance stopped at 23 points.

The match witnessed the referee counting 16 minutes of wasted time, by 10 minutes in the first half, but he continued to play until the 13th minute, while in the second half he counted six minutes, so that the two teams played 109 minutes.

Ajman received a strong shock after defender Mohamed Ismail got a red card after 25 seconds had passed in the fastest expulsion in the ADNOC Professional League, after he committed a violent violation against Walid Abbas, so that Al-Ahly youth dominated the course of the game, and Brazilian Yuri Cesar missed a real opportunity when Hareb Abdullah snatched the ball from Walid Abdullah was alone with the goalkeeper, and passed the ball to Cesar, who strangely hit the ball at the post, even though he was facing an empty goal (13).

The “Orange”‘s troubles increased with the injury of defender Miral in a joint ball with Majid Nasser, and Abdul Rahman Rakan (18) participated in his place, while Ajman goalkeeper Youssef Ahmed excelled in confronting more than one dangerous opportunity from Al-Ahly youth, most notably a ball played by Yuri Cesar and met by Argentine Federico Cartabia with his head. The goalkeeper pushed it away (29), before he shone and blocked a powerful shot from Uzbek Aziz Ganiyev (33).

And at the time when Shabab Al-Ahly came close to achieving the goal of progress, the Tunisian Firas Belarabi shone, and scored the first goal for the Ajman team from a counterattack led by Nasser Nour, and he passed the ball to Belarabi, who skillfully received the ball and fired a missile into the goal (38).

The “orange” goalkeeper shone and confronted a dangerous attack from one by Hareb Abdullah, then tackled a powerful ball from Yuri Cesar (45), and in the 11th minute of stoppage time, Shabab Al-Ahly got a penalty kick after the ball touched the hand of Ajman Novak defender, and Kartabia hit the ball into the goal. Scoring the first goal for “Dubai Knights” in the 13th minute of stoppage time.

The “Dubai Knights” continued his preference in the second half, and despite the brilliance of goalkeeper Youssef Ahmed in confronting the attacks of the guest team, Al-Ahly youth added the second goal through “friendly fire” from a ball played by Kartabia and Abd al-Rahman Rakan accidentally played it in his own goal (64), before adding The substitute, the Brazilian Guilherme Bala, scored the third goal in a wonderful way with a missile shot (74), so that the match ended with the victory of Shabab Al-Ahly.

Al Dhafra team achieved a valuable victory over its guest, Dibba Al Fujairah, with two goals to one, in the match that brought them together yesterday in the 13th round of the ADNOC Professional League, which led it to reach the seventh point, and leave the last place in the standings, while Dibba Al Fujairah’s balance was frozen at four points.

Dibba Al-Fujairah opened the scoring by Brazilian Eduardo in the 16th minute, after he headed a ball and reached him from a corner kick, which hit the crossbar and entered the goal.

Brazilian Diego de Tiango scored the equalizing goal in the 24th minute, taking advantage of a ball played by his Bulgarian colleague Milanov behind the defenders, and Al Dhafra succeeded in scoring the second goal in the 75th minute through Brazilian Claudio Raphael, taking advantage of a fixed ball that reached him from the side of the field, and he fired it comfortably into the goal after the player failed. Marcelo in her banishment.

An exciting win for Al Wahda over Bani Yas

Brazilian Joao Pedro led his team Al-Wahda to achieve an important and valuable victory with a clean goal away from home at the expense of Bani Yas in the confrontation that brought the two teams together yesterday evening at Al-Shamkha Stadium, within the 13th round of the ADNOC Professional Football League, to stop Al-Annabi series of negative results (a draw with Khorfakkan 2-2 and lost from Ajman (0-1) and climbed to third place after reaching point 26, while the points of “Al-Samawi” froze at 15 in ninth place.

The match was on its way to a goalless draw when Pedro snatched Al Wahda’s winning goal in the 90 + 1 minute, taking advantage of the homeowners’ defense error in pushing the ball away.

The ball was confined in the middle of the field in the first half, with a clear competition to control the maneuvering area, in light of the two parties relying on playing with advanced defense, which increased the intensity of the competition.

During the second half, the coaches of the two teams threw all their attacking cards to snatch the winning goal. While the hosts relied on counter-attacks only, Al-Annabi adopted a pressing attack method with a stream of continuous attacks that resulted in the winning goal in the 90 + 1 minute by the Brazilian Pedro.