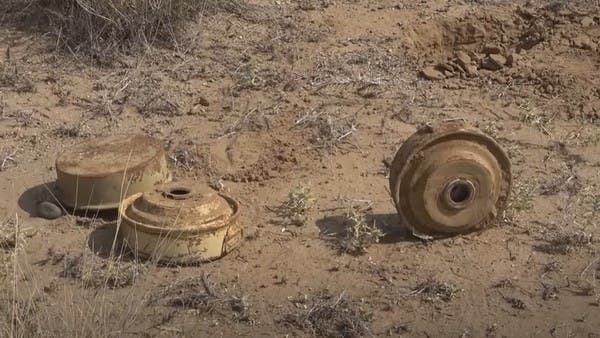 A Yemeni human rights organization called on the Houthi militia to reveal the maps of mines in Shabwa governorate, in the southeast of the country, after they caused, over the past few days, the death and injury of a number of civilians.

Mayyun Human Rights Organization said in a statement that it had “received alarming reports of the contamination of all areas of Usaylan and Baihan with mines, IEDs and unexploded ordnance, including residential areas, which poses a serious threat to civilians.”

The statement confirmed, “Numbers of civilians were killed and wounded in those areas as a result of the explosion of those mines, as reports documented the killing of 5 civilians and the injury of others within 48 hours.”

The organization called on the displaced to wait and not return to their homes in Beihan and Usaylan until they are cleared of mines, explosive devices and remnants of war.

It also called on the engineering teams concerned with demining to mobilize their efforts so that the displaced can return to their homes and carry out their life activities safely.

The statement considered that the United Nations should assume its responsibilities and pressure the Houthi leadership to hand over maps of mine networks to prevent more civilians from falling.

In the same context, the Yemeni Landmine Monitor announced the arrival of three additional engineering teams affiliated with the Saudi project to clear the Yemeni lands of mines “Massam” and the national program to Shabwa governorate to participate in the process of clearing the areas of Usailan and Baihan from the mines that the Houthis planted extensively and randomly in large areas of the two districts.

Local residents in the districts of Asilan and Baihan, which were recently liberated from the Houthi militia’s control, spoke of the militias planting mines extensively on the roads in an attempt to impede the progress of the Giants forces and the army to liberate the rest of the governorate and prevent progress towards the districts of Al-Bayda and Harib.