Shafi’i brings you back to the fore, and Al-Taei seizes the conquest points 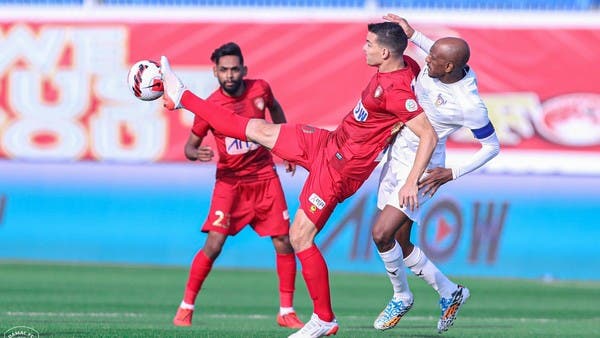 The Algerian Farouk Shafei, the leader of Damak, led his team to return to the top temporarily after scoring the winning goal in the net of his guest Al-Fayha, in the confrontation that ended 1-0, and hosted by Prince Sultan bin Abdulaziz Stadium in Al-Mahala, while Al-Tai achieved a fatal victory in front of his guest Al-Fateh 1-0, At the opening of the 12th stage of the Mohammed bin Salman Professional League.

At Prince Sultan bin Abdulaziz Stadium in Mahalla, Damak regained the tone of victories after his difficult victory against his guest Al-Fayha with the goal of defender Farouk Shafei.

The match witnessed an advantage for Damak, whose Argentine striker Zelaya had a real chance after receiving a pass in front of the goal from his Algerian teammate Hilal Soudani, but he failed to turn it into the net.

And at the 21st minute, Al-Fayhaa was forced to complete the match with ten men, after his Greek player, Panagiotis Takhtsidis, was sent off after his violent attack on Algerian Farouk Shafei, Damak defender.

In the second half, Damak intensified his attack and waited until the 83rd minute, when he scored the winning goal through his Algerian defender Farouk Shafei, who turned his colleague Abdullah Al-Ammar’s cross with his head into the Al-Fayhaa net.

With this result, Damak’s balance increased to 24 points, to return to the lead temporarily, and Al-Fayhaa maintained its previous balance of 17 points, to remain in sixth place temporarily.

At Prince Abdulaziz bin Musaed Stadium in Hail, Al-Taei scored a valuable victory in front of its guest Al-Fateh, 1-0.

Al-Taei owes this victory to his Algerian player, Amir Saoud, who scored the winning goal in the 90 + 3 minute after turning his teammate Abdel Karim Al-Qahtani’s perfect cross with his head into the Al-Fateh net.