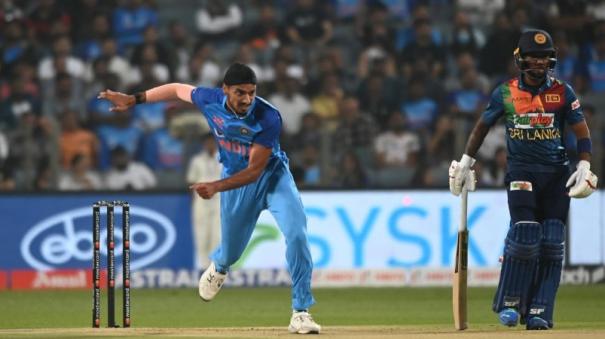 In the first T20 match, Hardik Pandya, who got away without bowling the last over to Axar Patel, bowled only 2 overs in the 2nd T20 match to protect himself and failed to complete 4 overs. Due to this, India lost as the other bowlers took a hit. On the other hand, Sri Lankan captain Shanaka took 2 wickets in the last over with India needing 20 runs to win by just 4 runs.

This is what happens when IPL captains like Hardik Pandya captain the national team. Why is he reluctant to bowl? Fear of getting hurt. If he gets injured, he will not be able to play in the upcoming IPL series? That is the concern of Hardik Pandya. Sri Lanka 113/4 at the end of 14th over. 83 runs in the last 6 overs. Sri Lanka captain Shanaka smashed 56 runs off 22 balls with 2 fours and 6 sixes. The score went from 113/4 to 206 runs.

The fact that Hardik Pandya was just showing body language during these periods and did not think he would bowl for the team even if he was injured raises questions about his selfishness. Hardik Pandya, who gave only 2 over 13 runs, why is he afraid? One is the fear of injury, if I can’t play in the IPL it will be a “disaster”! If another one ends up getting hit, his market value will decrease, how much trouble will poor Hardik Pandya have?!

Batting too, he hit 12 balls for 15 runs with a six and a four. So 10 runs have come in 2 balls. He has scored only 5 runs in 10 balls, this is how smart strike rate should be seen in T20 cricket. On the contrary, Sri Lankan captain Shanaka smashed 56 off 22 balls and bowled the last over as captain to bowl Akshar Patel and Shivam Mavi to win. Why would Shanaka have given one over left to Hazaranga and given a pep talk that we are preparing our players for this! He didn’t.

This is the difference between the likes of Hardik and the likes of Shanaka. How many matches has Dhoni carried the responsibility on his head and finished? How many matches has Kohli won? An all-rounder constantly shirking his responsibilities, that too as a captain, does not augur well for the future of the Indian team. Hardik Pandya is more accomplished than Dhoni, but he doesn’t really have the flair or spirit for captaincy, except for his body language drama. What does Hardik Pandya mean by calling Arshdeep Singh’s noballs a ‘crime’ and shirking responsibility without bowling?

Arshdeep Singh’s no-balls! – First we have to ask Dravid in an interview whether he will explain the Indian team selection confusion, why Siraj is not in the team, Kuldeep Yadav is not? Why not give a fast bowler like Umran Malik a new ball? What is the magic of continuing in the team even if Sehal is beaten? Who makes the decision to ‘sit’ Kuldeep Yadav who took 8 wickets and 40 runs? What’s going on in the team? Can someone explain? The media that should be questioned is plowing through statistical illusions.

Arshdeep Singh last played in November 2022, why should he be included in the squad while he is recovering from an ill health? Why should Siraj in Pharm be seated? Rahul Dravid and skipper Hardik Pandya are picking the team without knowing that Arshdeep Singh’s biggest problem is no-bagal. Arshdeep Singh has bowled 14 no-balls in T20s since his debut, including 5 no-balls yesterday.

Arshdeep Singh’s no-balls were the reason why Gusal Mendis got up with his bat yesterday. Sri Lanka were 7/0 at the last ball of the 2nd over. Mendis was batting hard when Arshdeep brought in 3 no-balls in a row, Mendis hit a boundary and a six on the free hit to reach 19 runs in that over.

After this, Pandya did not give him the next over. Can we give him the 19th over at such a crucial stage? This time Shanaka was caught by him but it was a no-ball. This is the 4th no-ball. At that time, Shanaka scored 30 runs off 14 balls and was in semi-touch. Arshdeep gave him life with a no-ball. Shanaka smashed 22 runs off the next 8 balls to take the score past 200 runs.

Hardik Pandya called on the inexperienced Umran Malik to bowl before the 19th over, his yorkers still unsharpened. Due to this, he gave away 21 runs in that over. After 2 overs in the power play, Umran Malik should be finished with 1 over in the 10th over and 1 over in the 12th.

But Hardik Pandya doesn’t seem to know!! Our question is why should we select unfit bowlers in the team as if they are not on the bench. So many questions arise after Rahul Dravid took charge of coaching, will he rise to the leadership of BCCI? Unknown Both are from Karnataka. Expect Rahul Dravid’s coaching skills to be in question in the upcoming Test series against Australia.