Sharjah makes the biggest deal in the Emirates stadiums 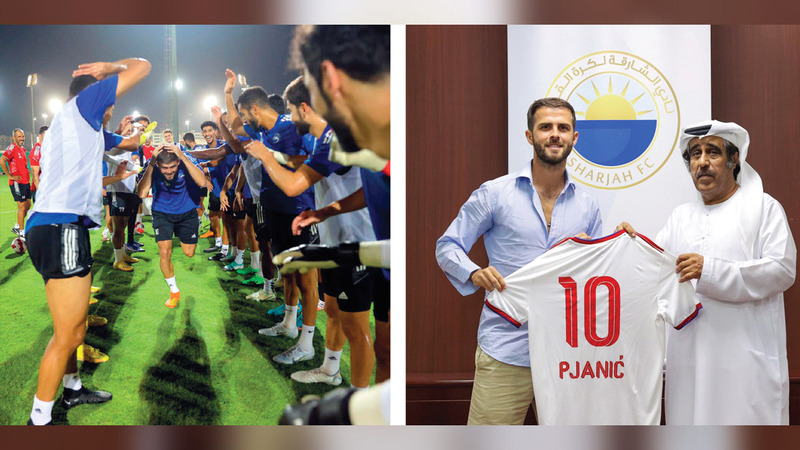 Sharjah Club officially announced the joining of the Bosnian international player Miralem Pjanic (32 years) to its ranks from the Spanish club Barcelona in the largest deal witnessed by the Emirati stadiums during the current summer transfers, which started on July 13 and will continue until the fourth of next October.

The club said in an official statement, “We welcome the joining of the Bosnian international, Miralem Pjanić, to our team from Barcelona, ​​in a free transfer deal with a two-year contract with the option of extension.” But the club did not mention the financial details of the player, whose market value is currently 9.5 million euros (approximately 35 million dirhams).

The player, Pjanic, arrived in the country at dawn yesterday, underwent medical examinations, and told “Sharjah Sports Channel” that he wanted to achieve championships and cups with the club and promised the public to provide the best. The player added that he was happy to be in the Emirates and that the contacts with him by the Sharjah Club were not a result of the moment, but rather a while ago.

Pjanic will be the second foreign player to join the Sharjah club during the current summer transfer period, after Spanish striker Paco Al Kasir recently joined the team from Villarreal.

Sharjah coach, Roman Kuzmin, described the Bosnian international player Miralem Pjanic as a great player, and that he could play at any time. This came during the introductory press conference for the match between Sharjah and Baniyas in the second round of the ADNOC Professional League, which was held yesterday, Wednesday, at the club’s headquarters, to talk about the match scheduled for tomorrow, Friday, at the Sharjah Stadium.

By asking Kuzmin whether Pjanic would be a great addition to the Sharjah team, Kuzmin refused to talk at length in this regard, stressing that for him his focus is currently on the players who are with him, pointing out that all the players with him are currently training with the team, and that he welcomes any player who joins the team. the team.

Media reports stated that Barcelona had agreed to transfer the player to Sharjah Club without a fee, although Pjanic had joined Barcelona last season from Juventus, for 60 million euros, and the matter would only be limited to the Sharjah Club guaranteeing the player’s salary and financial allocations that are made. It is also advertised.

And the Spanish newspaper, “Barsa Universal”, stated, “The deal will be beneficial for all parties, with Pjanic receiving a large amount of money, while Barcelona will have the opportunity to get rid of the high wages of players and reduce the expenses that caused him a major crisis during the current transfer period, and almost contributed to the non-recording of deals. The new.”

And the newspaper continued, “Pjanic is among three players who did not participate in any match with Barcelona in the Spanish League this season, along with Gerard Pique and Memphis Depay.”

She pointed out that at a time when it was reported that the Saudi victory was close to contracting with the Bosnian international, Sharjah’s strong three-year offer came to open the door for Pjanic to take the step of leaving the Catalan club.

She explained that Pjanic will move to Sharjah for free, as his contract with Barcelona will be terminated, and the amounts that the “king” will pay will be limited to the salaries of the Bosnian player.

It is noteworthy that Miralem Pjanic joined Barcelona in 2020 from Juventus for 60 million euros, but he did not appear well with the Blaugrana, and he moved last season on loan to Besiktas.

Kuzmin described Pjanic as a great player, and that he could play at any time.