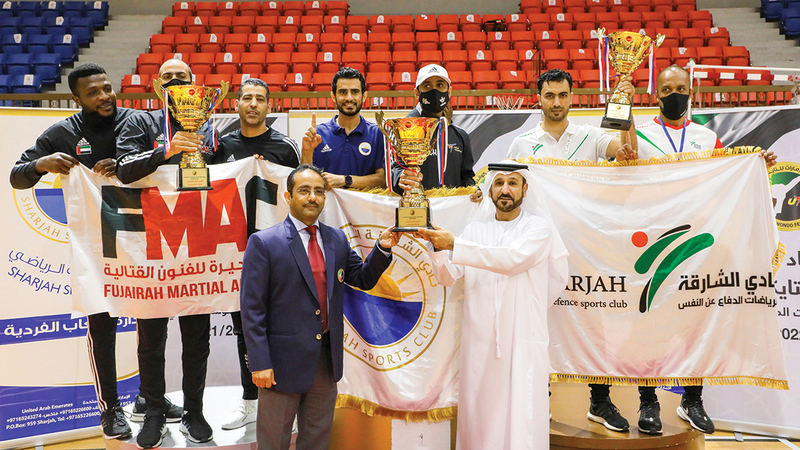 The Sharjah Club was crowned the Union Youth Open Taekwondo Championship, and won the first place cup in the general ranking of the championship, in which 88 players representing nine of the country’s clubs participated, and it was hosted by the Sharjah Club gym in Al Hazana. Sharjah won the largest number of medals, winning eight medals, including seven gold and one silver, and collected 84 points, more than 20 points more than the second place holder.

Engineer Suleiman Abdul Rahman Al Hajri, Board Member of Sharjah Club, Head of Individual Games Department, and Mohamed Ishaq, Technical Director of the Federation attended the tournament and witnessed the coronation of the winners. The technical director of Sharjah Taekwondo, Abdullah Hatem, said in a press statement, “The team worked and worked very hard in the past period in order to reach this result, which satisfied our ambitions, as we do not give up the first place, adding that the players deserve to be commended for the great performance they made during the tournament. ». He explained that “the support of the club’s board of directors and the management of individual games has great credit for the results that the karate team has been achieving, which is the culmination of the efforts, support and unlimited attention provided to the game, which has spread widely in the emirate and has attracted our citizens in the recent period.”

The technical director of (Taekwondo King) indicated that “the team will continue to prepare strongly for the next round of the championship, which is dedicated to the men’s category next month, indicating that the club always aims to be first, which is an uncompromising goal, and we congratulate our players on the distinguished result.”

Sharjah’s crowning came at the youth level, after winning seven golds and one silver.