Shiv Sena ministerial camp in Gujarat with 21 disgruntled MLAs – Why the sudden crisis in the state of Maharashtra? 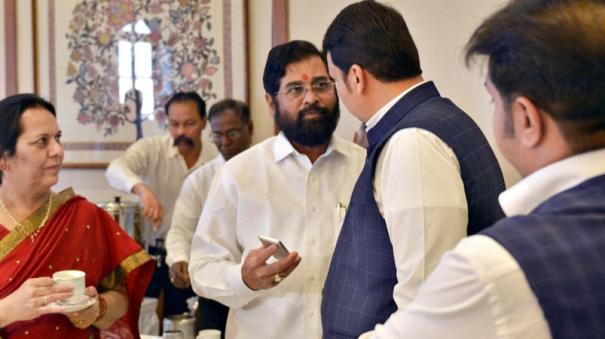 MumbaiShiv Sena senior minister Eknath Shinde is camping in Gujarat with 21 disgruntled MLAs, leading to a crisis in the Uttam Thackeray-led coalition government in Maharashtra.

Meanwhile, Minister Eknath Shinde left for Surat, Gujarat on Monday night with 21 disgruntled Shiv Sena MLAs who are his supporters. Disgruntled MLAs are camping in one of the star hotels there. Heavy police security has been put in place around the hotel where they are staying.

Apart from these 22, it has been reported that some other MLAs have also raised the battle flag against the Shiv Sena. Thus, there has been a great stir in Maharashtra politics. The Uttam Thackeray regime is in crisis. Senior Shiv Sena leader Sanjay Rawat has said that the BJP is trying to overthrow the government and it will not succeed.

In this context, Chief Minister Uttam Thackeray held consultations with senior Shiv Sena leaders and MLAs yesterday afternoon. Following this, Eknath Shinde was removed from the post of Speaker of the Shiv Sena Legislative Assembly. Shiv Sena MLA Ajay Chaudhary has been appointed to the post.

In a Twitter post posted by Eknath Shinde, he said, ‘I will never betray the thoughts of Shiv Sena founder Paul Thackeray. Paul Thackeray has gone on to teach us Hindutva. We will not betray Paul Thackeray’s thoughts for power. ‘

With chaos in the ruling coalition, the BJP is likely to try to form a new government if the Shiv Sena coalition government collapses. The total number of members in the Maharashtra Legislative Assembly is 288. There are currently 287 MLAs due to one death. It needs the support of 144 MLAs to get a majority. The BJP has 106 MLAs and its allies have 8 MLAs. With these 114 MLAs in power, the support of 30 more MLAs is needed. There are 22 disgruntled Shiv Sena MLAs, including Eknath Shinde. Including the 3 Congress MLAs who voted for the BJP in the by-elections, there are 25. The BJP needs only 5 more MLAs for a majority. So, it is said that the BJP is trying to form a government with the support of some more disgruntled MLAs.

Commenting on this, Maharashtra BJP leader Chandrakanth Patil said, “The chaos in the Shiv Sena is their internal party issue. The BJP has nothing to do with this. Can’t say right now what will happen next. Anything can happen at any time in politics. If the ruling coalition government collapses, we will consider forming a government. ” Meanwhile, BJP MLA from Maharashtra’s Jalagaon constituency Sanjay Gude met disgruntled Shiv Sena MLAs staying at a hotel in Surat yesterday.

The meeting discussed how to overcome the crisis facing the regime. Ajit Pawar, the main leader and deputy leader of the Nationalist Congress Party, met Uttam Thackeray last evening.