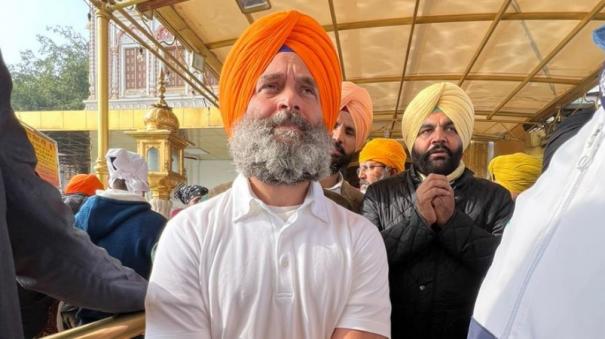 Chandigarh: With Rahul Gandhi’s India Unity Yatra starting tomorrow in Punjab, the BJP has urged Sikhs to boycott the Yatra.

In this regard, BJP National Spokesperson Jayveer Shergill said in a statement, “The Congress party is responsible for the riots that took place against the Sikhs in 1984. Anti-Sikhism is the real face of the Congress party. The people of Punjab will never forget the steps taken by the Congress government by sending the army into the Golden Temple of Sikhs through Operation Bluestar. So far the Congress has not made any attempt at Sikh unity.

At the same time, BJP has taken various measures for Sikhs. The central government observes December 26 as Veer Pal Divas, the day when two children of Guru Gobind Singh, the 10th guru of the Sikhs, were buried alive during the Mughal rule. Through this the nation is remembering their sacrifice. The Kartar Gurdwara, a Sikh holy place in Pakistan, has been made a separate road from India, and steps have been taken to allow Indians, especially Sikhs, to visit it. The BJP government has taken steps to bring the holy book Sriguru Granth Sahib to India safely in Afghanistan. But what did the Congress do for the Sikhs?

Rahul Gandhi’s current yatra has no public purpose. His passion for office is the reason for this pilgrimage. Rahul Gandhi is doing this pilgrimage to promote himself and to show that he is PC. Therefore, Sikhs should completely ignore this Yatra of Rahul Gandhi.

Worship at the Golden Temple: Meanwhile, Rahul Gandhi today offered prayers at the Golden Temple in Amritsar, Punjab. As his yatra is scheduled to take place in Punjab tomorrow, he performed the pilgrimage today. Later he also participated in the bhajan held there.