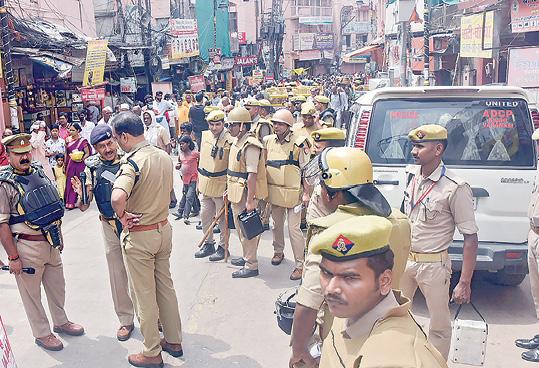 New Delhi: A case related to the worship of Singara Gauri Amman of Kashi Vishwanath Temple may be conducted. The Varanasi court dismissed the petition filed by the Gyanwabi Masjid, stating that the case does not fall under the Central Government’s Protection of Places of Worship Act.

Varanasi, Uttar Pradesh is home to the legendary Kashi Vishwanath Temple. There is a complaint that a part of this temple was demolished and the Gyanwabi Mosque was built there. Also, on the wall of the mosque compound, there is a statue of Goddess Singhara Gauri next to the temple. Worship of this idol is allowed only once a year.

Rakhi Singh, Seetha Sahu, Lakshmi Devi, Manju Vyas and Rekha Pathak, 5 women from Delhi requested permission to perform daily pujas to Sinkara Gauri Amman, as of 2021. They filed a case on the 18th.

Varanasi Civil Court Judge Ravikumar Diwakar, who heard the case, ordered a field inspection inside the mosque. Accordingly, in the field survey conducted, many evidences of the existence of the temple were found there. Complaints were also raised that there is a Shivlingam in the middle of Osukana where the hands and feet are washed before offering prayers in the mosque. Muslims who deny this claim that it is a spring.

Also, the case related to the worship of Goddess Singhara Gauri is not admissible for trial under the Central Government’s Protection of Places of Worship Act, 1991. Therefore, the Anjuman Indajamia Committee, the administration of the Gyanwabi Masjid, filed a petition in the Supreme Court seeking a stay on the case.

The Supreme Court heard the petition on May 16 and ordered that the Varanasi District Court should investigate and decide within 3 months whether the case can be investigated as per the Protection of Places of Worship Act of the central government. Subsequently, Varanasi District Court Senior Judge Ajay Krishna Vishwas was investigating the case from last May 23. The judge adjourned the case after both parties concluded their arguments on August 24.

Judgment was given yesterday in this case which is considered to be very important. In this regard, prohibitory order 144 was issued across Varanasi from yesterday afternoon. Heavy police security was deployed around the Varanasi District Court yesterday.

In this case, at 2 pm yesterday, Judge Ajay Krishna Vishwas issued his 26-page judgment. The judge read the last part of it in 10 minutes.

It said, “Singara Gauri Amman worship case does not come under Central Government’s Protection of Places of Worship Act, 1991. Therefore, the suit cannot be stayed as requested by the Gyanwabi Masjid parties. The petition of the Muslim side is dismissed. The trial of Singara Gauri Amman will continue from September 22,” he said.

Speaking to the ‘Hindu Tamil’ newspaper, Vishnu Shankar Jain, the lawyer of one of the petitioners in the Singara Gauri Amman case, said, “As the petition of the mosque side has been rejected, the field survey conducted in it will be investigated from now on. The Muslim side should give an answer to this. The investigation of the cases including the request for permission to worship the Shiv Lingam found in Osukana will also continue,” he said.

The Gyanwabi Masjid party is preparing to file an appeal against the Varanasi court verdict in the Allahabad court.

3 more important cases: In the Singhara Gauri Amman worship case, after the field survey, 3 more petitions have been filed in Varanasi District Court against the Gyanvabi Masjid by the International General Secretary of the Vishwavedic Sanathan Sangh, Kiransingh. In the first petition, ‘Gyanwabi Masjid was built by demolishing Adi Visveswar temple. By finding Shivalingam there, this has been confirmed’, he said. In another petition, it has been demanded that Hindus should be allowed to worship the Shivling found inside the mosque. In the third petition, it is emphasized that ‘non-Hindus should not be allowed inside the mosque area as it has become a temple’.

Judge Ajaykrishna Vishwas, who heard these 3 petitions last May, transferred the hearing to Senior Judge Mahendra Kumarpande of the fast track court. The hearing on these petitions is going on from May 30 in the fast-track court.

Protection of Places of Worship Act: As the Babri Masjid-Ram Temple case in UP’s Ayodhya became serious, PV Narasimha Rao, the Prime Minister during the Congress regime, issued an emergency law. The Central Government Places of Worship Protection Act, 1991 states that no changes should be made in places of worship of all religions across the country after independence. No case can be filed. In this, only the Babri Masjid is exempted’, it has been said.

Since then, many cases filed against mosques have been rejected by the courts citing this law. However, cases have been filed in Varanasi, Mathura and other areas. Also, a case was filed in the Supreme Court last year demanding the cancellation of the Central Government’s Protection of Places of Worship Act.