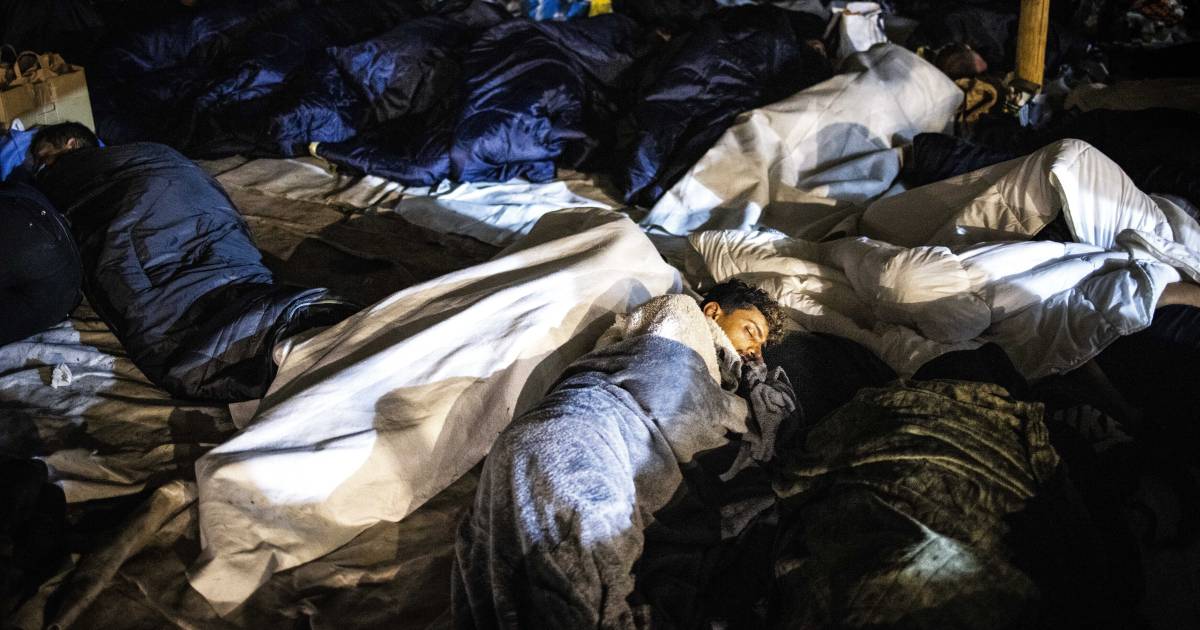 Hundreds of asylum seekers wait on Saturday afternoon in front of the overcrowded application center in Ter Apel. It is unclear whether they will also spend the night there. A spokeswoman for Doctors Without Borders (AzG) calls the situation ‘chaotic’.

About 250 people spent the night from Friday to Saturday on the lawn at the application center. In addition, some of the approximately 400 people who were taken by bus to Utrecht, Stadskanaal, Zuidbroek, Almere and Groningen on Friday evening, have returned. At the same time, new asylum seekers have arrived. The spokeswoman estimates that about 500 people have gathered at the application center.

120 people were returned from Stadskanaal in the morning and buses from Zuidbroek also arrived during the day, she says. The lodging in both places was for one night. The return of the approximately 200 people means that the ‘alarming’ health situation on the grounds of the application center continues. ‘We are working on extra facilities (more dixi’s) and other solutions are being worked on,’ reports a spokeswoman for the COA (Central Agency for the Reception of Asylum Seekers).

The returned asylum seekers feel more comfortable now that they have showered and eaten, but they are also worried. “Nobody knows what’s going to happen tonight,” the MSF spokeswoman said. “A lot is unclear. It hasn’t gotten any cleaner outside the gate either and the situation is chaotic.”

The MSF team treated 44 people on Saturday, which, according to the spokeswoman, is ‘quite a lot’. One person was taken to hospital by ambulance with heart problems. Someone also had a foot wound that had to be stitched up. On Sunday, the aid workers from Doctors Without Borders will be present again.

The COA cannot confirm whether there will be an extra emergency shelter in Emmen. RTL News and the regional channels RTV Noord and RTV Drenthe reported Friday evening that Emmen would have promised the extra emergency shelter. The municipality said in a reaction on Twitter that it was ‘surprised’ by the reporting. ‘The municipality of Emmen has not made any decisions or commitments about this’.

The Health and Youth Care Inspectorate (IGJ) sounded the alarm on Friday with health minister Ernst Kuipers and the chairman of the Groningen Security Region Koen Schuiling about the health situation on the grounds of the application center in ter Apel. On Friday evening, buses transported about 390 asylum seekers to emergency reception locations in Stadskanaal, Zuidbroek, Almere, Groningen and Utrecht. Some chose to stay. According to a spokesperson for the Council for Refugees, many asylum seekers were ‘afraid to get on a bus’ for fear that their asylum application would be processed later as a result.

At least fifty asylum seekers were taken to Almere, a hundred to Utrecht. The latter municipality received the evacuees in the Jaarbeurs. On Saturday they will be housed in another location in the city or region, mayor Sharon Dijksma, chairman of the Utrecht Security Region, reported. In order to help resolve the ‘distressing and acute situation’, the municipality of Utrecht will soon send its own people to Ter Apel to help. This includes crisis managers and other auxiliary troops who will support the registration and reception of people as quickly and smoothly as possible.

State Secretary Eric van den Burg (Justice and Security) asked him ‘urgently’ to arrange extra emergency shelter on Friday evening. The hotel also opened its doors to asylum seekers in mid-July. ‘Because the previous experiences were positive, the reception could be arranged very quickly this time. Neighboring companies have now also been informed about this temporary measure’, according to the municipality.