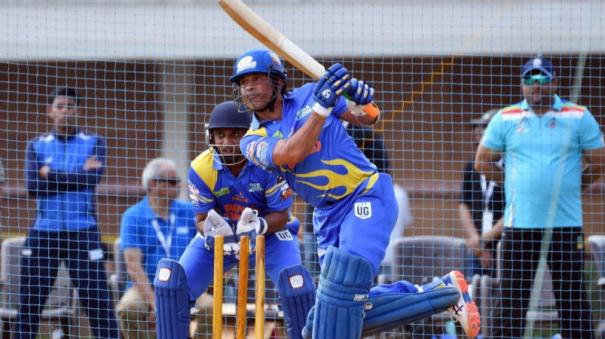 Dehradun: Former Indian player Sachin Tendulkar scored 40 runs off 20 balls in the Road Safety T20 series. Vlasi had a six coming off the crease in this innings. It is reminiscent of his old game. Fans are also celebrating it.

The match between India Legends and England Legends was played at the Rajiv Gandhi International Cricket Stadium in Dehradun on Thursday. After losing the toss and batting first, the Indian team scored 170 runs for the loss of 5 wickets in 15 overs. The match was played as a 15 over match due to rain. Chasing that target, the England team scored only 130 runs and lost the game.

Sachin, who entered the field as an opener for the Indian team, scored 40 runs in 2 balls. It includes 3 fours and 3 sixes. His strike rate was 200. On the 5th ball of the third over of the match, Sachin came down the crease and hit a six. Fans said it was reminiscent of his 1998 Sharjah innings.

‘You are not getting old’, ‘Sachin Chaknam in the T20 team’, ‘Summava Sonnanga Master the Blaster’, ‘Sachin can tick as India’s back-up opener for the T20 World Cup’, ‘God of cricket on the field’, ’49 years old. But still he is dominating the field’ said the fans.