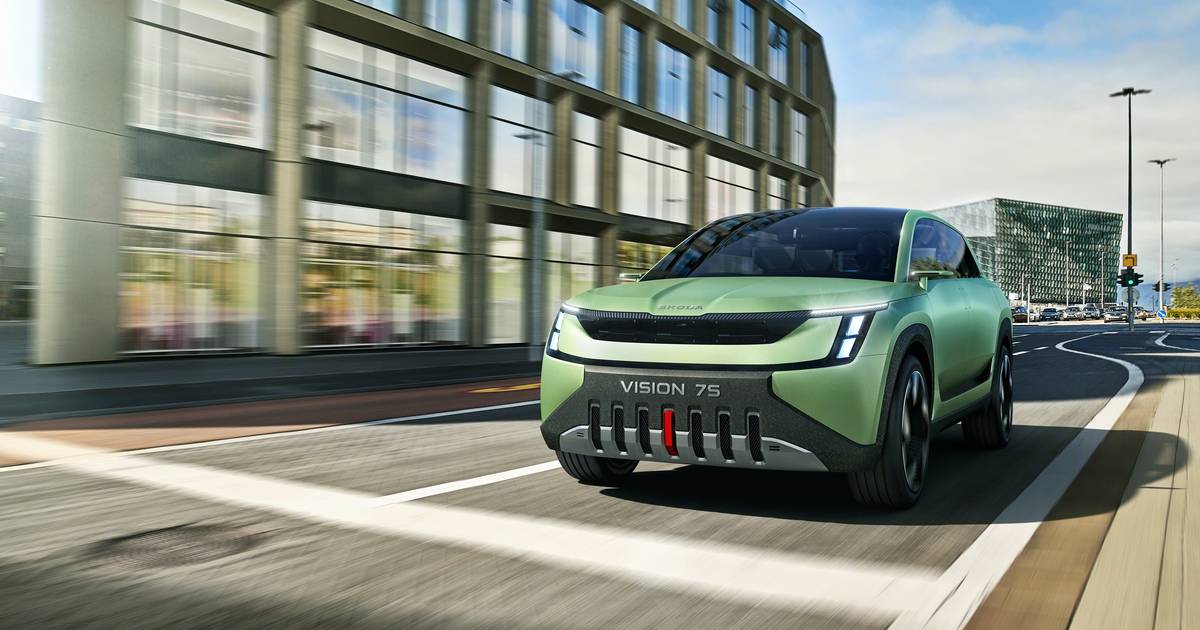 For the new electric cars, a small, relatively cheap model, a compact SUV and a seven-seater top model has been chosen. The concept version of this large SUV, called Vision 7S, has just been unveiled in Prague. The brand’s new corporate identity is already clearly visible in this car.

Skoda promises for the Vision 7S a driving range of more than 600 kilometers (thanks to an 89 kWh battery pack) and fast charging with up to 200 kW. This means you spend less time waiting at a charging station. Furthermore, Skoda wants to make its latest generation of combustion engines more efficient and cleaner. And completely new model generations of the Superb and the Kodiaq will appear in the second half of next year. Finally, the Octavia will undergo a facelift in 2024.

By 2030, more than 70 percent of all Skodas sold in Europe should be electric. In order to achieve this goal, an additional 5.6 billion euros will be invested in electric mobility over the next five years and 700 million euros in the digitization of the brand: the new generation of cars must use the internet and apps even smarter, and infotainment must also also easier to operate.

In the pursuit of becoming a sustainable car manufacturer, the plan to start producing battery packs itself, near the headquarters in Mladá Boleslav, fits in with the plan. Two electrically powered trucks are used for transport to the nearby car factory. From 2030, the factories in the Czech Republic and India will only produce cars that are completely CO2-neutral.

Skoda sold 870,000 cars worldwide last year. The Czech brand has been part of the Volkswagen Group for 30 years.

Special attention for children: the Skoda Vision 7S . is so special

The concept car for the new, large SUV from Skoda, unveiled tonight, shows in many ways what we can expect from this brand in the coming years. For example, the front and rear bumpers are made from recycled tires and the same applies to the wheel arch edges. Striking are the triangular rear window pillars, in which the renewed brand logo is processed. As on the nose, the new decal on the tailgate is illuminated. Orange bars are incorporated in the center of the front and rear bumpers, with which the high-voltage system of the electric car can be switched off from outside in the event of an emergency.

The floor of the interior is also made of recycled tires. The upholstery is made of 100 percent polyester and the dashboard is finished with a matte metallic protective layer.

Much attention has been paid to ease of use. The infotainment menu structure and functions have been simplified. The Vision 7S has two different interior configurations: Drive and Relax. In Drive mode, the driver has a head-up display with augmented reality and an 8.8-inch instrument panel. The most important functions can be controlled with haptic rotary switches, which are extra easy to find thanks to their orange color.

In the center of the dashboard, the rotatable 14.6-inch display is positioned vertically, so that, for example, the map and navigation instructions are clearly legible and the bottom of the screen remains optimally within reach. For example, the Relax mode can be switched on during a charging stop. The interior then transforms in a smooth movement into a kind of rest position. For extra space, the flattened steering wheel and instrumentation rotate completely away. The front seats slide in and – like the second row seats – tilt backwards for extra comfort. The central display then rotates into a horizontal position to watch a movie or play a game.

The door panels contain features in their surface. Interactive panels are placed behind the translucent trim, which illuminate in a specific color for the various functions: the door releases in orange, the temperature control in red and blue. You can also write a message with your finger on the panels and the children can use the panels as a drawing board.

A child seat can be attached to the tunnel console, centrally in the car. This is not only the safest position, but also gives the passengers in the second row the opportunity to pay close attention to the baby. A camera in the roof sends images of the baby to the central infotainment screen, so that the driver and co-driver can also keep an eye on things.

Numerous smart solutions have also been incorporated in this Vision 7S, such as the backpacks that can be attached magnetically to the backrests and the magnetic strips in the center tunnel, from which metal drinking bottles and a first aid kit can be hung. Just in front of the central display is a crystal visible from the outside on the dashboard, which shows the battery and charging status of the car by means of colours.