Soares shows the red eye for Al-Ahly stars .. “The reserve player is more important to me than the main one”! 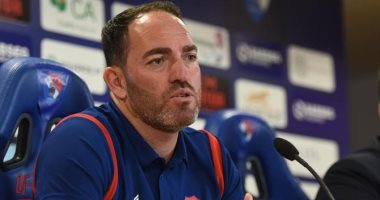 Al-Ahly coach, Portuguese Ricardo Soares, showed the red eye to the stars of his team in their first meeting on Thursday evening.
And Egyptian media reported that Soares met with Al-Ahly players before he led the team’s first training after officially taking charge, as he stressed that no player has the right to be required to play mainly in official matches, and said: “He who works hard and performs strongly in training will have a place.” In the starting line-up, without looking at any names, the reserve player is much more important to me than the main one, and everyone should pay attention to that particular part.”
He added: “I came here to win all matches and win championships. I will not accept the presence of any player who deviates from this line. We will enter a difficult stage that only accepts winning.”
Al-Ahly club announced the appointment of a new technical staff to lead the team led by Portuguese Ricardo Soares, along with five of his compatriots, as assistants in the new formation of the body, which was announced yesterday, Thursday, to succeed Pitso Mosimane, the South African coach who left his position.