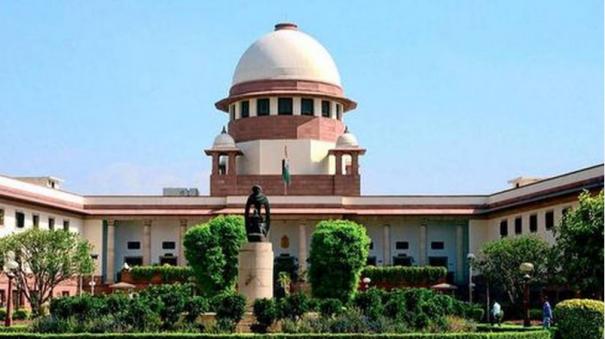 New Delhi: The Chief Justice of the Supreme Court has opined that free announcements by political parties during elections should be regulated

BJP lawyer Ashwini Upadhyay had filed a case in the Supreme Court seeking a ban on political parties declaring freebies during elections. When the case came up for hearing last time, the Chief Justice said, “The central government may not be able to hold a detailed discussion in the Parliament on this matter. No political parties are unwilling to publish such free announcements. Therefore, a special committee of experts can be formed on this very important issue and come up with good models.” had said.

Also, the opinions of opposition parties, Reserve Bank, Niti Aayog, Finance Committee, Law Commission, Election Commission etc. have to be sought in this regard. He also asked all the parties to give their suggestions in this matter.

In this case, this case came up for hearing today. Then the Chief Justice said, “We have seen the Election Commission’s response in the newspapers. But they did not get it until last night. How come they got the newspaper before the court? What else is there to read in it?” he asked.

“Should we legislate on this issue? Will political parties submit election promise statements to the Election Commission?” He also questioned.

In response, the Election Commission said, “It is not mandatory for political parties to file statements regarding election promises.” At that time, the central government said, “Most of the election free promises are not included in the reports. They are announced during public meetings and election campaigns.”

Advocate Vikas Singh, appearing for the petitioner, argued, “All the states have a debt of Rs 15 lakh crore. The Election Commission should have a committee of financial experts to look into these.”

Following this, arguments were made pointing to programs including free color TV, which was implemented for the first time in Tamil Nadu.

Although there are various factors involved in the issue of free declaration of elections, economic order must be established like in other countries of the world. It is not known what the economic condition of a state is before a party comes to power. And don’t make mistakes for the sake of doing something.
This issue should be regulated,” he said.

Senior advocate Abhishek Manu Singhvi, who opposed the petition, argued that “the central government’s reluctance to legislate on this free matter is surprising. It is not even within the jurisdiction of the court.”

At that time, the Chief Justice said, “The court cannot interfere in some matters by saying that it is not within the jurisdiction. We do not want to go into the disqualification of the parties who issue free notice. That would not be democratic. Therefore, after all, we are a democratic country.”

He also adjourned the case to August 17, saying that the central government, Election Commission, senior advocates and political parties should present their opinion, views and thoughts on the matter.

Earlier, the Election Commission had filed a reply in this case. It said, “We welcome if a study committee is set up on election freebies according to the Supreme Court. But the Election Commission will not be a party in that committee. One side will consider the announced freebies meaningless, but it will be necessary for another party. If it is announced to ban freebies, it will be politicized and the parties will benefit.” Pursuing”.