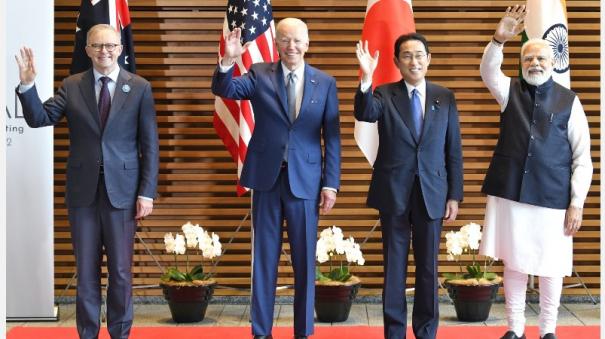 Tokyo: We discussed our responsibility for the ongoing conflict in Ukraine and the ongoing tragic humanitarian crisis. We assessed the impact on the Indo-Pacific region. Quad leaders reaffirm their commitment to maintaining peace and stability in these regions. We have unequivocally pointed out that the focus of international order is on the sovereignty of all nations, territorial integrity and respect for the UN Charter. The leaders who attended the Quad Summit jointly stated that we urge all countries to resolve all issues through international law.

This year’s Quad Nations Summit was held in Tokyo, Japan. The leaders who attended the conference issued a joint statement. A press release from the Prime Minister’s Office said: “We are meeting in Tokyo today with Australian Prime Minister Anthony Albanis, Indian Prime Minister Narendra Modi, Japanese Prime Minister Fomio Kishida and US President Joe Biden to renew our commitment to an independent, transparent India-Pacific region.

We remain steadfast in the fact that the Govt-19 issue is still having an impact on people and the economy around the world, despite the arbitrary trends between governments and the tragic conflict in Ukraine.

Peace and stability: We strongly condemn terrorism and all forms of violence. We emphasize that acts of terrorism cannot be justified in any way. We reaffirm our fight against global terrorism. We will take concerted action against all terrorist groups.

Covit-19 and Global Health Care: For more than two years the effects of Govt-19 have wreaked havoc on the world. Had an impact on our communities, citizens, health care workers, and the economy. The countries of the Quad Organization will continue to lead global efforts to confront Govt-19 with a view to creating a better framework for health care and strengthening health practices.

Basic structure: India – We are committed to providing in – depth cooperation on key infrastructure to enhance productivity and resources in the Pacific region. We are also committed to tackling the debt crisis in the face of Pandemic losses in many countries. Over the next 5 years the quad is set to seek more than US $ 50 billion for infrastructure and investment in the region.

Duration: Today we have launched the “Quad Climate Change Adaptation and Mitigation Plan” with two central themes of “mitigation” and “acceptance”. We welcome the new Australian Government’s strong action plan on climate change, including legislation to eliminate carbon dioxide emissions by 2050.

Quad Fellowship: We welcome the announcement of the Official Quad Fellowship as a way of recognizing people’s relationships with people. Applying for this is currently underway. About 100 students from the Quad countries will be enrolled in the United States each year for graduation. Thus they said.