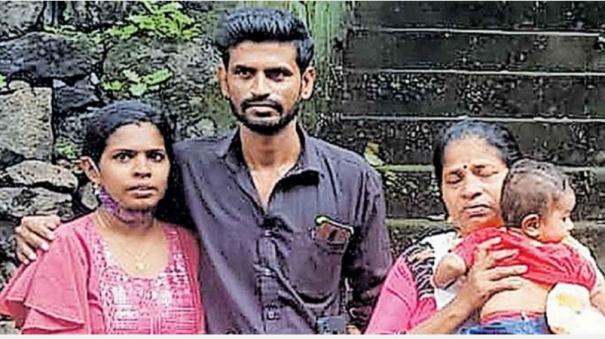 Thiruvananthapuram: A boy named Govind, who lived in Gujarat since he was one and a half years old, has found his mother and sister who live in Kottayam district of Kerala after 22 years.

Geetha hails from Nedungunnam, Kottayam district, Kerala. He used to stay and work in Gujarat. She was married to Rambhai from Gujarat in 1993. Geetha became pregnant again when the couple’s eldest son, Govind, was one-and-a-half years old. Rambai brought his pregnant wife to his mother’s house in the hills of Kerala and lived there for some time. He left suddenly one day saying that he was going urgently for work. Then he took only his son Govinda with him. Rambai never came to meet his family after that. Rambai went back to Gujarat and gave away his son Govind to one of his relatives and married another woman.

Regarding what happened after that, Geetha told the Hindu Tamil newspaper: “I don’t know what happened to my son and husband for the last 22 years. From time to time the memory of the son comes. But suddenly my son Govind came looking for me and my daughter. We couldn’t believe it.

Govind was only one and a half years old when he left us. Govind only knows Gujarati and Hindi. But despite all that, Govind has found us. My husband told me at a young age that our house was near a police officer’s house.

With the help of some people who speak Hindi and Malayalam, he came to the local police station and asked for help. The police traced us through our panchayat member Sreeja Manu. Now my daughter Gopika is married and I have become a grandmother.

Like my grandson, I parted with my son when he was old. It was emotional to meet again after 22 years. But I did not know Hindi and he did not know Malayalam so we could not communicate. However, language is not a barrier to express affection between us. Thus said Geeta.