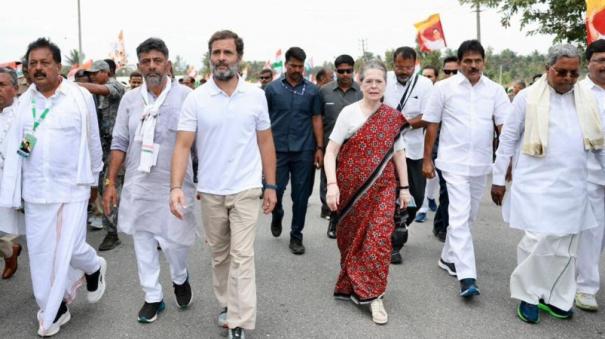 Former Congress leader and MP from Wayanad Rahul Gandhi started the Pada Yatra in Kanyakumari on 7th of last month in the name of Indian Unity Journey. Following Tamil Nadu and Kerala, he is making a pilgrimage to Karnataka.

Rahul Gandhi, who took a 2-day rest for the Pada Yatra due to the Dussehra festival, resumed the Pada Yatra at Pandava Pura in Mandya yesterday. Interim president of Congress and his mother Sonia Gandhi, former chief minister Siddaramaiah, state president DK Shivakumar and others participated in the foot pilgrimage.

Sonia Gandhi walked half a kilometer talking to local Congress functionaries. Then Rahul interrupted, ‘You have done enough. Come by car’ he insisted. He also tied the shoelace of Sonia Gandhi, who was undressed, and expressed his love. The Congressman was moved by the son’s affection for his mother.

Congress leaders like Sasi Tharoor and DK Shivakumar shared the photo of Rahul Gandhi bending down to tie Sonia’s shoe lace. This photo and video has gone viral on social media.