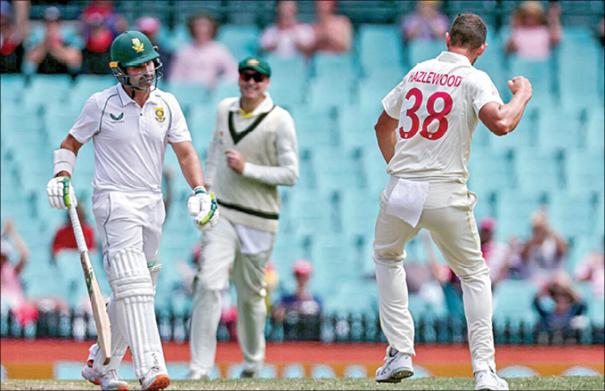 Sydney: In the 3rd Test cricket match against Australia, South Africa lost 6 wickets for 149 runs in the first innings.

The Australian team won the toss and batted in this test match in Sydney and at the end of the 2nd day of the match, the Australian team accumulated 475 runs for the loss of 4 wickets in 131 overs. Day 3 play was abandoned without a ball being bowled due to rain. Usman Khawaja was unbeaten on 195 and Matt Renshaw on 5.

As the 4th day of the match was held yesterday, the Australian team declared the first innings without batting further. Batting after this, the South African team lost wickets at regular intervals. Captain Elgar was dismissed for 15 off Josh Hazlewood. Sarel Ervey was bowled by Nathan Lion for 18 runs.

Heinrich Klaasen (2), Kaya Zondo (39) and Kyle Verrenne (19) were all out off Batcummins. Themba Bouma scored 35 runs off 74 balls with 2 sixes and a boundary before Josh Hazlewood was dismissed. At the end of the 4th day, South Africa scored 149 runs for the loss of 6 wickets in 59 overs.

In the last day’s match, the Australian team may show seriousness in giving a follow-on to the South African team by quickly taking the remaining 4 wickets. If this happens, Australia will be more determined to hunt down all the wickets of the South African team in the 2nd innings. A win in this match would guarantee Australia a complete 3-match Test series and qualification for the ICC World Test Championship finals.

The Meteorological Department said that there will be no rain interruption in the last day’s play. The Australian team is confident that 98 overs will be bowled today to compensate for the rain. Because in the first Test held in Brisbane, the South African team lost 20 wickets in 86 overs including both innings. In the 2nd Test held in Melbourne, they lost in just 137.3 overs.