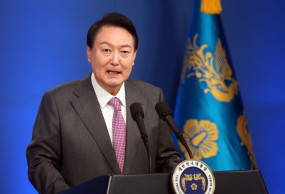 Digital Desk, Sol. South Korean President Yoon Suk-yol last week raised his approval rating to 32.6 percent thanks to a positive public assessment of the government’s response to Hinmanor, a poll revealed on Monday.

Yun’s approval in a RealMeter survey of 2,006 people between September 5-8 increased 0.3 percent from the previous week, while her disapproval rating also dropped 0.3 percentage points to 64.6 percent, reports Yonhap news agency.

The pollster said approval ratings showed an upward trend, despite negative elements such as clashes with the Democratic Party and conflict within the People Power Party.