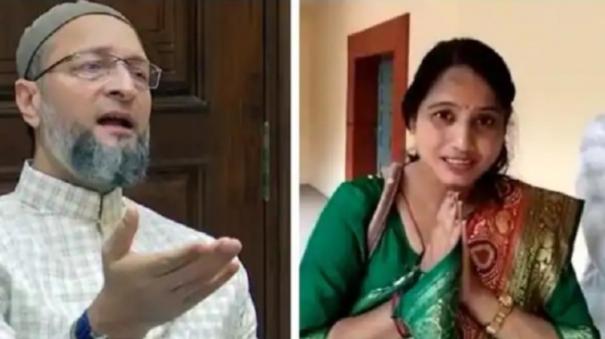 The results of the elections for a total of 255 municipalities in Madhya Pradesh have started coming out since yesterday. The results released so far show that the ruling BJP and Congress are winning the municipal wards in MP with a margin of one or two candidates. As per the current situation, BJP and Congress cannot win the leadership positions in about 100 municipalities without the support of independent and small parties.

In this case, the Muslim parties formed in the southern states of Telangana, Telangana and Kerala have set foot in Madhya Pradesh municipalities for the first time. Hyderabad MP Asaduddin Owaisi’s All India Majlis-e-Ittahadul Muslim (AIMIM) has captured three wards of Khargone city.

BJP won most of the wards in Khargone, Congress won just 4 seats and Independents won 7 seats.

Aruna Shyam Upadhyay, a Hindu woman, has won one of the three wards won by Muslim party AIMIM. In the other two wards, Muslim candidates Shakeel Khan and Shabnam Adeep have won. Through this, it is considered that the dominance of Owaisi party has started to strengthen in the Nimar region of Madhya Pradesh where Khargone district is located. Before leaving Andhra Pradesh for the first time, it contested Maharashtra’s assembly and municipal elections and won some seats. After Bihar and Uttar Pradesh, now AIMIM has entered Madhya Pradesh.

Similarly, the Social Democratic Party of India (SDPI), a political wing of the Popular Front of India, a Muslim organization that originated in Kerala and has spread to many major states of the country, has also won three wards. Headquartered in Delhi, STBI is gaining influence in northern states including Uttar Pradesh. The party has defeated the BJP in 2 of Neemach Nagar and the Congress in one ward of Indore.

The Congress has urged the STBI not to contest this municipal election, as this will split the votes and favor the BJP. STBI refused to this and entered the competition. Especially in the city of Neemach last May there was a religious riot. This is due to the attempt to place Hanuman idol in a place where Muslims believe.

Madhya Pradesh, ruled by BJP Chief Minister Shivraj Singh Chouhan, is due for assembly elections next year. Earlier, BJP’s slippage in municipal elections has worried party leaders. For the first time, Muslim parties are starting to establish a foothold in Madhya Pradesh, which has also shocked the BJP. Thus, BJP’s national leaders are preparing to hold a consultative meeting on Madhya Pradesh politics.