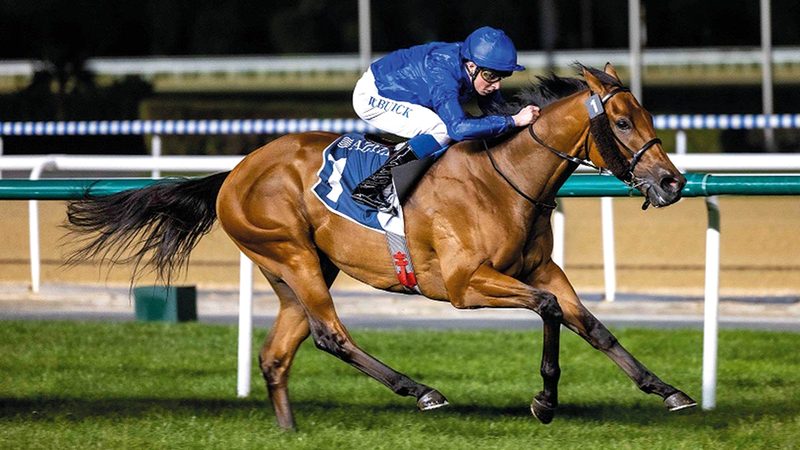 The horse “Suffren Prince” was crowned with the “Godolphin” logo and under the supervision of coach Charlie Appleby, champion of the “Zabeel Award”, the day before yesterday, in the main fourth race of the eighth race of the Meydan Racecourse season, which was organized by the Dubai Racing Club and its six runs were sponsored by “Dear Real Estate Development », with total prizes amounting to 555 thousand dirhams.

The horse “Suffren Prince” maintained his unbeaten record in the country’s tracks, and the horse, a descendant of the stallion “Dubawi”, added his first victory after an absence from the races that lasted 300 days.

The knight, William Buick, succeeded in driving the horse “Suffren Prince” in the main race, whose prizes amounted to 120 thousand dirhams, to stay close to the front horses during the first stages, before unleashing him in the last 300 meters, bypassing his competitors and crossing the end line of the half-track that extended for a distance. 1600 grass meters, in first place, with a time of 1 minute, 36 seconds and 61 parts of a second, 1.25 lengths ahead of the second-place owner, the horse “Zaman” owned by Abdullah Al Muhairi, under the supervision of coach Ahmed bin Harmash and the leadership of rider Saif Al Balushi.

The horse, “Street Mode”, with the slogan of Juma Mubarak Al-Junaibi and the supervision of coach Musabeh Al-Muhairi, added his second victory in the season, by winning the title of the fifth round, which ran for a distance of 1600 meters sandy, and was allocated to horses of the “Handicap” category, with prizes amounting to 87.5 thousand dirhams, before the horse “Garth” was caught. With the slogan of Muhammad Al-Sabousi and the supervision of coach Ahmed bin Harmash, he won the title of the sixth and final round, which is dedicated to the “Handicap” horses for a distance of 1900 grassy meters, and its prizes amounted to 87.5 thousand dirhams.

• 555 thousand dirhams are the total prizes for the eighth race of the Meydan Racecourse season.