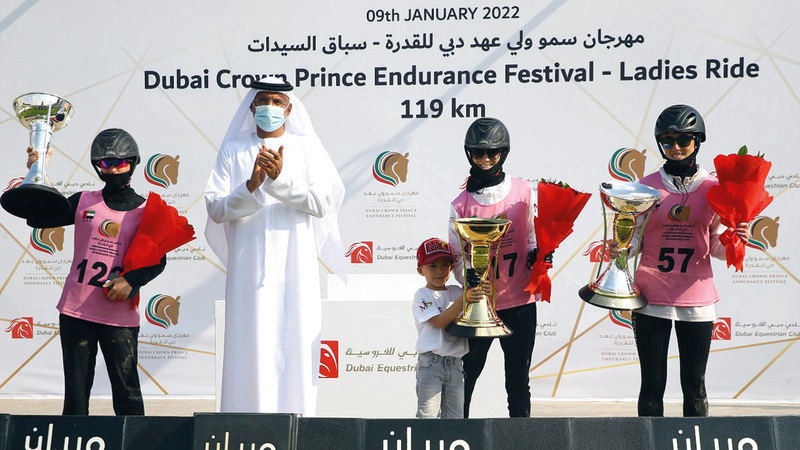 Spanish jockey Bruna Omatel won the women’s race on the second day of the 119-kilometre Dubai Crown Prince Endurance Festival, yesterday, at the Dubai International Endurance City in Saih Al Salam, with the participation of 82 knights from various stables and equestrian clubs in the country. Bruna Omatel won the title on the horse “Akram de Florence”, owned by M7 stables, after it came in third place in the first stage, and maintained the same position in the second stage, then advanced to the runner-up in the third, before climbing to the top in the fourth The second Uruguayan jockey, Cecilia Garcia, came on the horse “Al-Sil”, owned by the M7 stables, and the third Argentine jockey, Maria Santina, on the horse “Eov La Lizon”, owned by the F3 stables.

As for the stages of the race, the first stage for a distance of 40 kilometers witnessed the jockey Mira Jassim Al-Ansari leading the race on the horse “Beit Jan Al-Ain”, owned by Al-Bawadi Stables. The Argentine Catalina Bastons came in second place, then Bruna Omatel third.

In the second stage, over a distance of 32 kilometers, Argentine Santina advanced from sixth to first place, while the leader of the first stage, jockey Mira Jassim Al-Ansari, fell to second place, and Spain’s Bruna maintained third place. Argentinian jockey Santina held first place in the third stage, and Spain’s Bruna Omatel advanced from third to second, and Bastons third advanced from fifth place with a time of 58:17 minutes, before the Spanish won the title in the fourth and final stage.