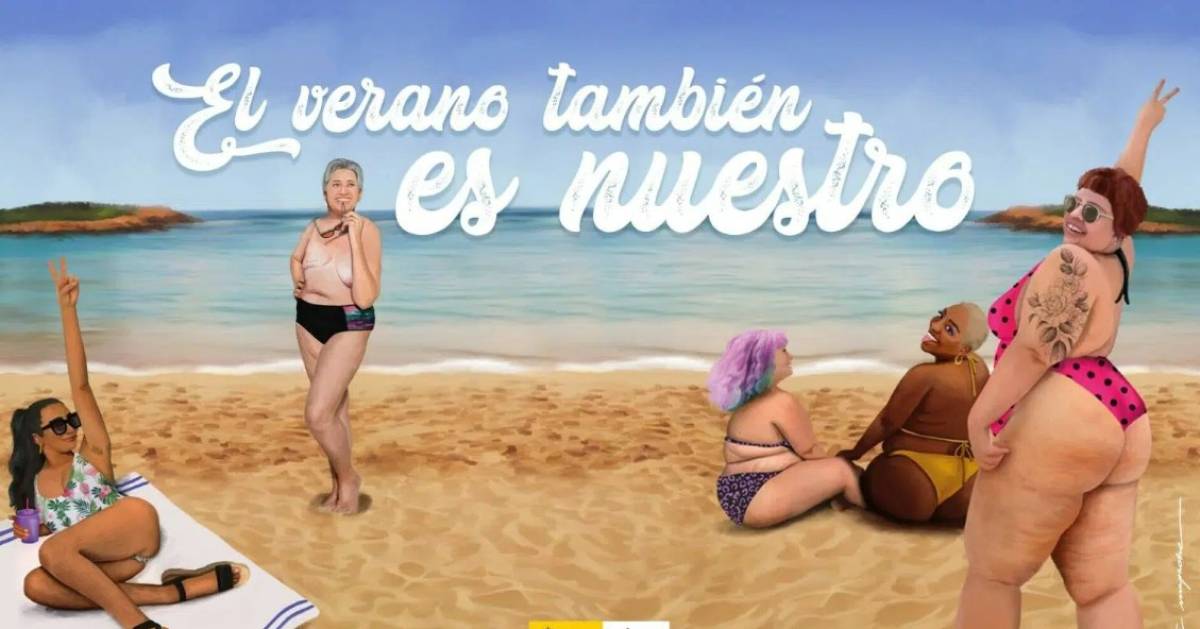 The Spanish government campaign to encourage women of all shapes and sizes to go to the beach is causing a stir at home and abroad. The images used of at least two models have been published and even edited without permission, making it even more painful for the Ministry of Equality.

With the slogan ‘The summer is also ours’, it launched a campaign against aesthetic violence directed by the Spanish Women’s Institute on Wednesday. The message is: ‘Enjoy how, where and with whom you want; today we toast to a summer for everyone, without stereotypes and without aesthetic violence against our bodies’. The colorful and cheerful campaign poster features five women of all shapes and sizes: one with body hair, a topless woman who had a mastectomy and three fat women having fun on a beach.

One of them is British Sian Lord, a model and champion of body positivity (body positivity) shown on the left of the image. She reacts indignantly to the campaign poster. Not only had she not given permission for her photo to be used, but worse, her left lower leg prosthesis was photoshopped away. And that in a campaign about body positivity.

Lord let this know to ‘plus-size model’ Curvy Nyome, who is also on the campaign poster without permission. “It’s so important that women agree to their images and bodies being used. And also get paid if these images are used. Thank you all for your support, I really appreciate it,” the British wrote on Instagram. She thanked the British newspaper Subway and in particular journalist Gergana Krasteva ‘for listening to what I had to say and recording it accurately’.

Nyome said he was sent the image on Thursday. ‘Don’t I deserve to even be asked if my image can be used for a Spanish government campaign? Don’t I deserve to be paid for using that image? It’s always my images that are used without my permission and I don’t get paid. Plus I have to fight on my own to get paid (something I should have gotten). I’m exhausted. Can black women ever rest?’ she writes.

According to Nyome, this is the second time this has happened to her. “The first time was in 2020 when an illustrator used my image to sell products. The point is I would never say no if it’s for a good cause, but come on, ask for my permission. This is so frustrating!’ according to the plus size model.

The Ministry of Equality paid 84,500 euros, according to Spanish media, to produce the poster that defends the right of all women to enjoy the beach, regardless of their size, breasts, color, sexual orientation or body hair.

The maker of the poster said he was paid 5000 euros for the job. The woman told the Spanish media that she acted out of ‘ignorance’. She is said to have picked the images from the internet and then edited them. It is unclear where the rest of the money has gone.