Spanish ecologist said, forest fire is under control, but it is not right to live here 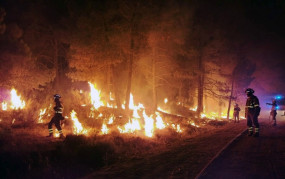 Digital Desk, Madrid. Despite successful control of wildfires in Spain’s Catalonia, Segovia, Zaragoza and vila regions this week, an ecologist said the wildfires made it unsuitable to live here.

“We don’t know exactly what will happen, there are always doubts and climate models are sometimes wrong, but everything tells us that we are experiencing high temperatures, heat, The waves are moving towards more erratic, less in quantity but very intense conditions of rainfall.

According to the European Forest Fire Information System (EFFIS), 193,247 hectares of forest area in Spain alone have been burnt by fire this year. This is a new record, surpassing the 189,367 hectares recorded in 2012. Professor Narcis Pratt has said, in large part this is due to a lack of woodland management. Woodlands have been neglected for many years because it was too expensive to do anything with them, they were difficult to access, and not at all profitable.

The main lesson is that we need to manage woodlands differently. We should avoid large clusters of trees. Instead, trees should be mixed with undergrowth, meadows and agricultural areas, called forest mosaics. This will make it very difficult. The forest fire will spread. Pratt warned that unless authorities around the world radically reduce carbon emissions in the short term, the situation is likely to worsen.

Professor Narcisse Pratt added, “What we’ve seen with so many heat waves here this year is something that scientists believed was not going to happen for the next five to ten years.” Things have accelerated and scientists are concerned that the situation is fast approaching what they predicted for 2030 or 2050. On Friday, firefighters were trying to control three wildfires, which together covered some 31,000 hectares in Galicia, while two new fires started on the island of Tenerife and in the Guadalques de la Sierra in the region of Madrid.