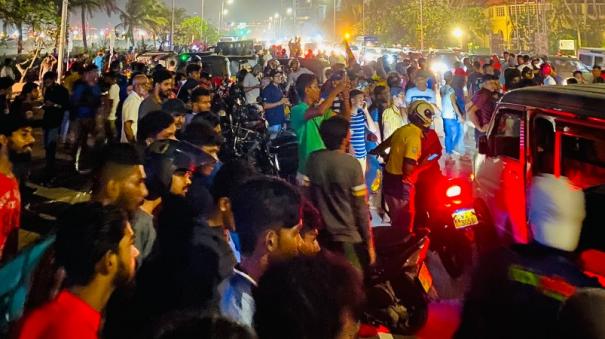 Colombo: The Sri Lankan team has created a record by winning the current Asia Cup. Sri Lanka beat Pakistan in a thrilling final. Sri Lankan people have celebrated it on the streets of Colombo.

The country is currently facing a severe economic crisis. The people of the country are facing unspeakable tragedies. The game of cricket is a medicine for them to forget their pains. Now the team has also won the Asia Cup.

The ongoing Asia Cup had to be held in Sri Lanka. But the series was shifted to the UAE due to the situation there. Sri Lanka has now won the title of champion.

It is reported that huge screens have been set up on the streets of Colombo for people to watch this final match. People gathered there in large numbers to watch and enjoy the competition. After Sri Lanka’s victory, celebrations erupted on the streets of Colombo. Former Sri Lankan player Russell Arnold, who anchored the match, had informed about it. He said that what is seen on the ground is just a sample and there will be many celebrations like this in Sri Lanka.