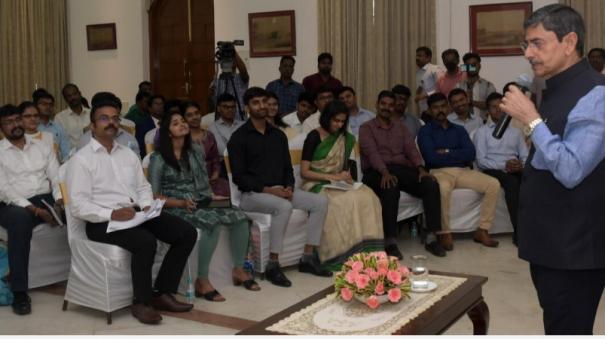 Chennai: “If there is a difference of opinion between the central and state governments, you should stand on the side of the central government,” Governor RN Ravi said during the discussion with the civil service candidates.

Tamil Nadu Governor RN Ravi on Tuesday discussed with 150 candidates who are going to face the Indian Civil Services Examination. During the discussion held at the Governor’s House, Chennai, the Governor answered various questions raised by the students. Its description:

The Central Government should stand by: “When there is a difference of opinion between the central and state governments, you have to side with the central government. There should be no doubt about it.

To learn Hindi: We should learn as many languages ​​as we can. In addition, learning a language can help us grow. As we learn more languages ​​we can connect with more people. Hindi is the most spoken language in our country. So long as Hindi is the language spoken by the majority of people, it is good for us to learn an additional language.

Governor RN Ravi had recently said that it should be called Tamil Nadu instead of Tamil Nadu. Following this, the issue was marked by controversy.