Star of Justice: Romarinho and Talisca “best” in the Pro League 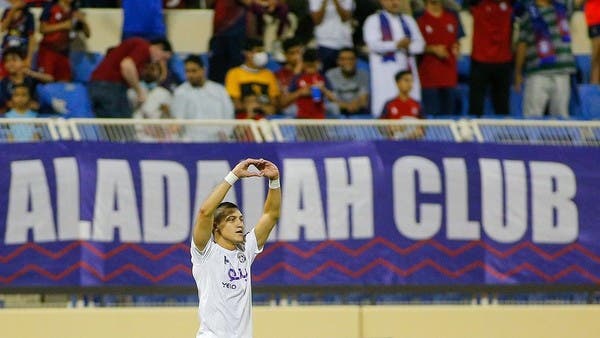 The Brazilian Alan Lima, the player of Al-Adala, expressed his happiness after his team qualified for the Mohammed bin Salman Professional Cup, noting that the duo Talisca of Al-Nasr and Romarinho of Al-Ittihad Jeddah are the most prominent during the current season.

Alan Lima told Al Arabiya.net: I am very happy after qualifying for the professional league, I have a feeling of happiness and satisfaction, I feel the size of the achievement that we have achieved with our strong work throughout the season.

“When I came here to this club, I knew that the goal was to go up and get back into the professional league, and that was also my personal goal.” I always wanted to play in the Pro League and I worked hard for it. I imagined it was going to be tough because there is no easy tournament and it was really tough, and we ended up in the last round with five teams that could snatch the ticket, but we managed to qualify.

Alan joined Al-Adala at the beginning of the last season, coming from the Turkish team, Tuzlaspor.

Regarding the difficulties he faced last season, he said: Physically it was difficult, I had some injuries, however, when I was in my best stages physically, technically and mentally, I had an injury that kept me 8 games away, so it was a very difficult season for me.

When asked about not guaranteeing qualification until the last round, he explained: I was confident from the beginning that we would qualify, I saw the quality of the team and the clear goal we had, it was very clear to all the players and we worked hard for it, so we were confident of achieving the goal.

Lima played 30 matches with his team in the league this season, participating in 27 of them.

The Brazilian player praised his Tunisian coach, Youssef Al-Mannai, saying: He was very important for us, he changed the general atmosphere that prevailed in the team, we were in a bad state, so he came and restored our confidence, and that was very important. He gave me all the confidence, even when I was injured, he told me that I would recover and help the team in the last games, and I was really able to come back.

Lima scored 8 goals in the league and made 8 assists for his teammates this season.

Alan said that he is following the Brazilian duo Talesca and Romarinho, noting that they are the best foreigners in the professional league, and he also confirmed that Salem Al-Dosari, the star of Al-Hilal, is the best Saudi player he has seen.

Regarding living in Saudi Arabia, Alan confirmed that adapting to the atmosphere was smoother than what he expected before his arrival, as he said: My life has not changed much from before, I go to training, go out to dinner with my wife and come home, and sometimes I go to the mall, so the adjustment was smooth And smoother than I could have imagined.

Al-Adala will participate with Al-Khaleej and Al-Wahda during the next season of the professional league, after they succeeded in climbing from the first division.