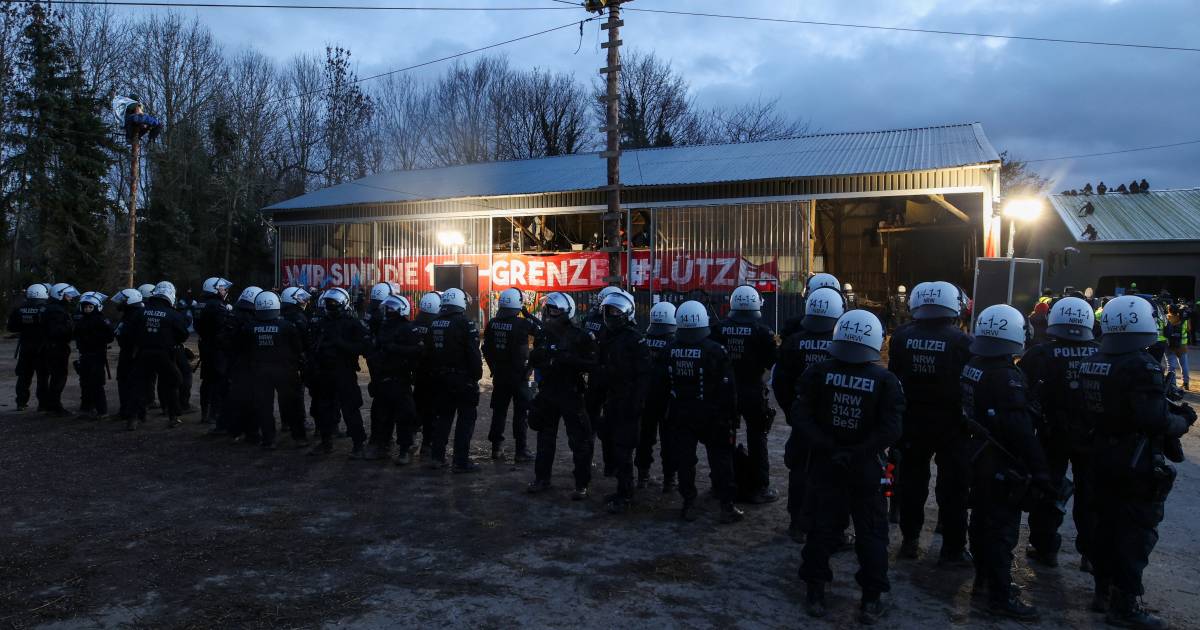 with videoThe first day of the evacuation of the lignite village of Lützerath, not far from Roermond, occupied by climate activists, went according to plan. “Apart from a short explosion of violence, the protests are mainly peaceful, which means that our objectives for today have been achieved,” said Dirk Weinspach, chief of police of the Aachen police at the beginning of the evening.

Those objectives were the erection of fences around the area where the climate activists are located to limit their freedom of movement and prevent the influx of new occupiers and to support the energy company RWE in closing off the lignite mine to prevent sabotage by activists. In total, about 300 activists were involved in the ghost village of Lützerath itself and about 250 in the neighboring area.

“At the start of the action, our men were pelted with fireworks, Molotov cocktails and stones. Two officers were slightly injured,” the police chief told the WDR news bulletin The Aktuelle Stunde of the public broadcaster of the state of North Rhine-Westphalia. The violence, he said, was short-lived. “The protests were mostly peaceful after that.”

According to him, a start has been made with the evacuation of some buildings and the removal of barricades and constructions. “About 200 occupiers took advantage of the opportunity to leave the site without police measures,” said Weinspach. The overall situation was calm around 7 p.m., he said.

The chief of police did not want to say how much time the police thinks it will need for the evacuation action. Four weeks have been set aside for this, he said on Monday. On Tuesday, agents largely removed the barricades around Lützerath. Weinspach is doing everything in his power to prevent casualties, such as the lignite protest in Hambacher Forst in 2014 with one death.

The vast majority of climate activists refuse to let the police tell them what to do. They have usually hidden in tree houses and buildings or climbed on roofs.

The 22-year-old German Gwen sits on top of a meter-high blockade of hewn paving stones, pallets and scrap metal, surrounded by four construction fences. “If we attach ourselves to the ground, we are easy prey,” he says from behind an army green face covering with blue eyes with bags sticking out. “We are fighting for so much more than just Lützerath, it is about the future of our planet. That’s why we don’t give in easily.” Another activist shouts from a treehouse: “We’ll stay here until the police are gone!”

Through a microphone, an officer urges the demonstrators to surrender voluntarily and to leave the occupied area and the squatted houses. “You still have the chance to leave via the southern exit at any time,” the officer announces. Next to a dismantled barn, a female communications officer says that the police are out for ‘de-escalation’ and want to avoid a scuffle.

Greenpeace is also making itself heard in Lützerath. Campaigner Karsten Smid is particularly critical of Germany’s early coal exit. “The shift from 2038 to 2030 is purely symbolic. After 2030, it will no longer be profitable for RWE to mine lignite. Even at the responsible ministry they know this,” he says to our reporter.

The Greenpeace mobile building was already evacuated on Tuesday evening, as was the wooden clubhouse of the climate activists’Mahnwache‘, (wake) whose license officially expired on Monday night. Initiator Hajo, an original resident of Lützerath, was pessimistic about Lützerath’s chances on Monday evening. “It has been two years before it goes off, a miracle must happen.”

A large demonstration will take place at Lützerath this Saturday in which Greta Thunberg wants to participate, the organization announced today. The Swedish climate activist was already there once in September 2021, a day before the German federal elections.

The German Greens, who struck a deal with coalition partner CDU in North Rhine-Westphalia, are under heavy fire from climate activists because of ‘Lützerath’. Many people find it indigestible that a party that profiles itself as ecological agrees with lignite mining in the area.

How much the Greens are in a split, became clear on Tuesday afternoon from a conversation next to a white party tent in the adjacent forest of Lützerath. In it Timon Dzienus, the federal spokesman for the Young Greens, was scolded by an older party member for wanting to talk to the press and participating in an unsolicited ‘sitting blockade’.

“I have been committed to the preservation of Lutzerath from the start,” Kathrin Henneberger, member of the Bundestag on behalf of the Greens, answers a question from the AD why the Greens do not oppose lignite mining. Henneberger (34), who grew up near Cologne, has been seen among the activists for days.

German politicians have given energy company RWE from Essen the green light to extract 280 million tons of lignite until 2030. Five villages have already collapsed, Lützerath is the next victim. German Vice Chancellor and Economy & Climate Minister Robert Habeck defended the eviction on Wednesday and called on activists to refrain from violence. “The empty settlement of Lützerath, where no one lives anymore, is in my opinion the wrong symbol,” said the Greens politician.