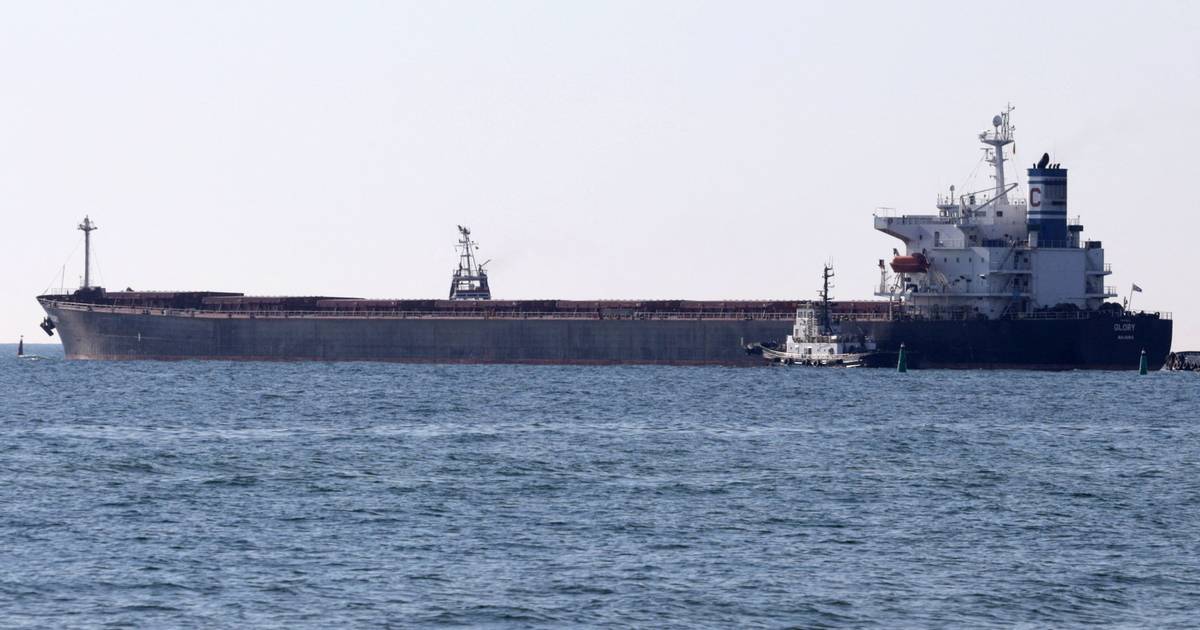 Twenty-one ships traveling south through the canal are expected to continue their journey with minor delays, the canal service provider said.

The 225m long and 35m wide bulk carrier Glory, owned by the Greek shipping company Target Marine but flying the flag of the Marshall Islands, ran aground near the town of El Qantara when it joined a southbound convoy. Egyptian officials have yet to provide details about the cause of the ship’s grounding. In parts of Egypt, including the northern provinces, the weather was bad on Sunday.

According to the UN’s joint coordination center for grain exports from Ukraine, the bulk carrier with more than 65,000 tons of corn from the country attacked by Russia is on its way to China. Satellite tracking data, analyzed by the AP news agency, showed the bulk carrier was in a one-lane section of the Suez Canal just south of Port Said on the Mediterranean Sea.

General Director Oussama Rabie of the Suez Canal Authority (SCA) does not expect any disruption to shipping traffic. “It is going normally. We professionally dealt with the malfunction that occurred on board the Glory,” he said in a statement. 51 ships will sail in both directions on Monday.

The information is extremely sensitive to Egypt, which is in the midst of an economic crisis – the Egyptian pound lost 75 percent of its value in 2022 – and is looking to buy dollars. The Suez Canal is one of the most important sources of foreign currency with more than $7 billion a year in revenue.

It was not the first ship to run aground in the crucial waterway. In August, the Singaporean-flagged oil tanker Affinity V also ran aground in a one-lane section of the canal, blocking shipping traffic for five hours.

In March 2021, the Japanese container ship Ever Given blocked the Suez Canal for six days. The blockade disrupted global shipping for a time. The specialized Dutch company Smit Salvage, part of dredging and maritime service provider Boskalis, was called in to refloat the ship. That worked after several attempts. The blockade forced 200 other freighters to wait or choose another route.

The Ever Given ran aground in the southern part of the Suez Canal on March 23 of that year. This happened just after the 400-meter-long and 59-meter-wide freighter had entered the major thoroughfare from the Red Sea and was on its way to the Mediterranean. According to the Taiwanese container shipping company Evergreen, which operates the freighter, the colossus went off course due to a power failure and/or poor visibility due to a dust storm with wind gusts of about 40 knots. That equates to wind force 9.

The 193-kilometer Suez Canal is one of the busiest shipping lanes in the world, accounting for about 12 percent of global trade. About a million barrels of oil and a large amount of liquefied natural gas (LNG) are also transported through the canal every day. When the Suez Canal is closed, ships between Asia and Europe must circumnavigate via the Cape of Good Hope, which can require weeks of extra sailing time. Oil tankers from the Middle East also make extensive use of the Suez Canal.

The Suez Canal was deepened and widened in 2015 by the Dutch dredgers Van Oord and Boskalis, because sea-going vessels are getting bigger and bigger. By April that year, two more freighters had run aground in the canal. These were the Danish container ship Susan Maersk and the Liberian bulk carrier Margret Oldendorff. Ship traffic was delayed for hours.