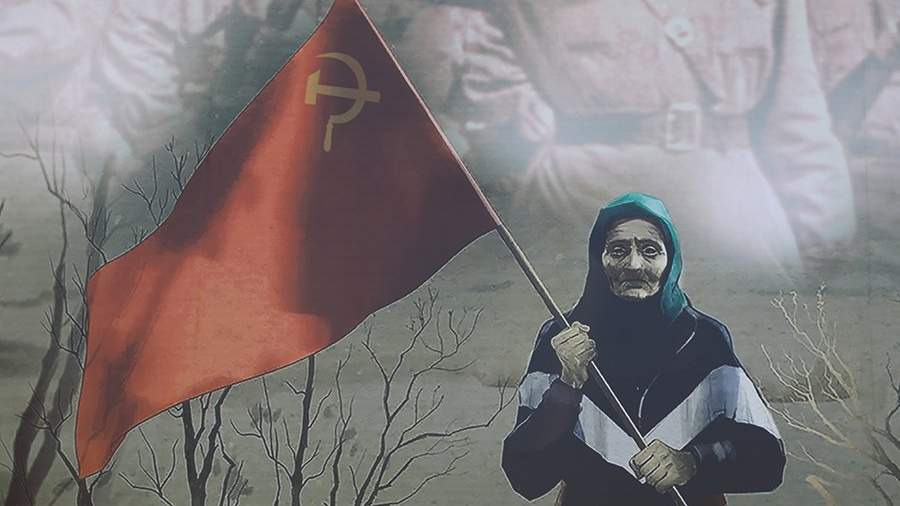 On the wall of the Yunarmiya headquarters building in Yuzhno-Sakhalinsk, a street art appeared depicting a Ukrainian grandmother, who met the military of the Armed Forces of Ukraine with the Soviet flag, mistaking them for the Russian army, and then refused to exchange the red banner for products from Ukrainian fighters. This is reported by RIA Novosti with reference to the head of the city headquarters, history teacher Yulian Krasavin.

“In a lesson with teenagers, we talked about the Great Patriotic War and the significance of our victory in it. Of course, we also discussed with the guys a video about a Ukrainian old woman with a red flag that appeared on the Internet, and came to the conclusion that a woman’s courageous act should become an example for others and her image should appear on the wall of our headquarters, ”said the agency’s interlocutor.

He clarified that the schoolchildren had been preparing a sketch on their own for a week, and the airbrush artist Yevgeny Karandash applied the image to the wall.

“The heroes of graffiti in Yuzhno-Sakhalinsk, in addition to the grandmother, who has become a new symbol of the resilience and pride of the Russian people, are the soldiers of the Great Patriotic War,” Krasavin added.

On April 7, a video appeared on the Web showing how a Ukrainian grandmother met nationalists who arrived in her village with the Banner of Victory. This story caused a wide public outcry, as the footage showed that the grandmother refused to give the banner to the radicals, after which they took away the package of food, which was originally intended for an elderly Ukrainian woman.

Later, on April 23, Izvestia received a video of street art on a residential building in the town of Reutov, near Moscow, depicting a grandmother with a Victory banner.

The Ukrainian grandmother with a red flag was also depicted by the artists of Yekaterinburg, which became known on April 10. It is worth noting that the shadow that falls from the pensioner is an analogue of the Motherland Calls monument.

On April 26, it became known that in Ukraine the nationalists received another rebuff from a simple elderly woman who did not want to speak Ukrainian with them, despite the weapons in the hands of young people.

Since February 24, Russia has been conducting a special operation to protect Donbass. The Kremlin noted that the special operation pursues the goal of demilitarization and denazification of Ukraine. The decision was made against the backdrop of an aggravation in mid-February of the situation in the region. As emphasized in the Ministry of Defense, the Russian Armed Forces are striking at the military infrastructure of Ukraine.