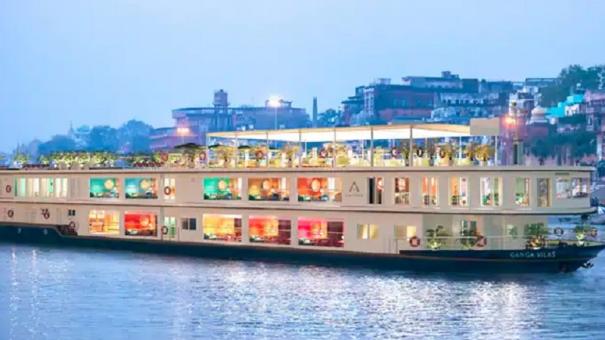 It has been decided to run a luxury cruise from Uttar Pradesh’s Varanasi via Bangladesh to Assam’s Dibrugarh. A luxury ship named ‘MV Ganga Vilas’ was built in Kolkata for this purpose. This ship is operated by a private company called ‘Heritage Rivers Journeys’. This is the longest river cruise in the world.

This ship takes 52 days to travel from Varanasi to Dibrugarh. The ship covers a distance of more than 3,200 km. 5 states like UP, Bihar, Jharkhand, Assam, West Bengal and the neighboring country Bangladesh come along its way. Tourists traveling on this ship can visit 50 tourist destinations including world heritage monuments, national parks, steps, Patna in Bihar, Sakibganj in Jharkhand, Kolkata in West Bengal, Dhaka, the capital of Bangladesh, and Guwahati in Assam.

After reaching Kolkata, the ship will proceed to Dhaka port in Bangladesh. From there the Ganga Vilas ferry enters the state of Assam through the Brahmaputra river and reaches Dibrugarh. Prime Minister Modi launched this ship yesterday. The Prime Minister also inaugurated the ‘Tent City’ set up on the banks of the Ganga in Varanasi, Uttar Pradesh. The Prime Minister also laid foundation stones for inland waterway projects in the states of Bihar, West Bengal and Assam. In this event, Shipping Minister Sarbananda Sonowal, U.P. Chief Minister Yogi Adityanath and others were present.

On this occasion, Prime Minister Modi spoke to the tourists through video by inaugurating the cruise of MV Ganga Vilas and said:

Strong transport connectivity is essential to create a developed India. Commencement of ferry service from Kashi to Dibrugarh will help put North India’s tourist destinations at the forefront of the world tourism map. Now this shipping service has been started and has removed the distinction of region, religion and country. India welcomes tourists from all regions. This will further boost the country’s tourism sector and create new employment opportunities.

There are more than 125 rivers in India. Hence, they can be used to transport goods and carry passengers. Waterways are not only good for the environment, they also save money. The cost of running these is two and a half times less than that of highways. Similarly, water transportation costs only 3 times as compared to rail service. This is what he said.

With the launch of Ganga Vilas Cruises, East India will become more prominent on the world tourism map. It is a momentous moment when luxury ferry service has started on the river Ganga. It heralds a new era in Indian tourism. India has everything. There are things beyond your imagination and imagination. India cannot be described in words. It can only be experienced by the mind. India has always kept its mind open to all without religious discrimination.

This 51-day cruise is a unique opportunity to relate to the country’s culture and discover the beautiful aspects of its diversity. Thus he said.

A “Tent City” (Tent City) has been built on a 100-hectare plot of land on the banks of the Ganges, opposite the steps towards Ram Nagar, to accommodate tourists coming to Varanasi. During Dev Diwali and Maha Shivratri when there is a large influx of tourists, these tents are set up to accommodate them. This tent city is set up to accommodate 200 people. It has all the facilities of a modern hostel. A similar tent city exists in the Thar Desert region in the Rann of Kutch, Gujarat’s Kutch district, and in Jaisalmer, Rajasthan.