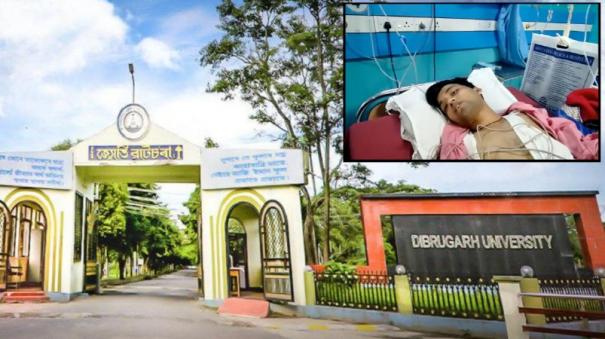 Guwahati: A student attempted suicide by falling from the second floor due to ragging in Dibrugarh University in the state of Assam, and 5 people have been arrested in connection with this incident.

Anand Sharma is a student of Commerce Department, Dibrugarh University, Assam. He was allegedly ragged by senior students. Frustrated by this, he jumped down from the second floor of the hostel. In this he was seriously injured. Based on the complaint filed by Anand Sharma’s family, the police arrested five students, including one former student and four current students. Anand Sharma has been admitted to the hospital’s emergency department with serious injuries.

Chief Minister Hemanta Biswas commented on this on Twitter. In it, he said, “It has been reported that a student of Dibrugarh University attempted suicide due to raking. The district administration has been urged to handle this case with more care. Appropriate medical treatment will be provided to the affected youth. Students should not engage in raking.”

It has come to notice that a Dibrugarh University student is hurt in an alleged case of ragging. Close watch maintained & followup action coordinated with district admin. Efforts on to nab the accused, victim being provided medical care.
Appeal to students, say NO to Ragging.

In this case, it seems that both the fellow students who studied with Ananda Sharma were ragged on the day of the incident. The anti-rogging committee of the university has started an inquiry into the matter.

Meanwhile, in the complaint filed by the victim’s mother, “My son has been harassed by seniors for a long time. He complained to me that the seniors are taking his money, taking away his cell phone. They are harassing me mentally and physically. Photographs of ganja and liquor bottles were stuffed on my son’s hand. They are planning to take it and use it to intimidate them for their own defense in the future. He has been complaining about senior students for the past 4 months.” This incident has created a lot of excitement in Assam.