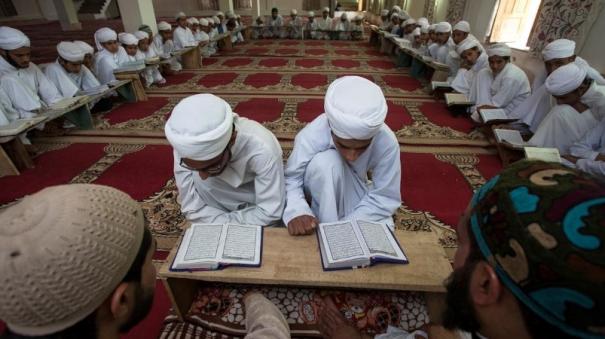 New Delhi: On August 31, Chief Minister Adityanath ordered the District Collectors to conduct an inspection of madrasas in Uttar Pradesh. The state government has asked to conduct a survey on 11 important issues including the facilities of madrasas, financial status, educational status of students, qualification of teachers, subject sections and complete the survey by October 15 and submit a report.

In this case, a consultation meeting was held yesterday at the famous Madrasah Darul Uloom in Deoband. In this, administrators of 400 madrasas of UP participated. The meeting was presided over by Maulana Syed Arshad Madani, Senior Professor of Darul Uloom and Jamiat-e-Ulama Hind President.

After the meeting Maulana said, “U.P. All madrasahs should give full cooperation to the examination conducted by the government without protesting. Since no complaints have been received on the surveys taken so far, Muslims should cooperate with this. After the study, the government should come forward to solve the problems due to the financial situation,” he said.

There are about 16,500 government-recognised madrasas in UP. Out of them, 558 madrasas are government funded. Another 7,442 madrasahs teach modern education along with Islam. Besides, there are thousands of unrecognized madrasas. There are complaints of poor condition of students and teachers.

Most of UP’s Muslims enroll their children in madrasas to study the Quran before enrolling them in public educational institutions. Those students have the facility to join Aligarh Muslim University of UP and private institutes for higher education as per the specific degrees offered by those Madrasahs.

Due to such reasons, it is said by the government that it is necessary to conduct an inspection in madrasas. Accordingly, the support provided by Darul Uloom Madrasa to conduct the study is of great importance, as this Madrasa has gained a good reputation among Muslims internationally.