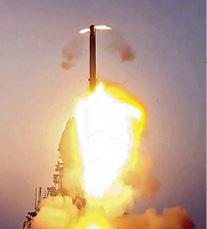 India and Russia have been jointly developing BrahMos missiles since 1983. These missiles can be launched from submarines, warships, warplanes and land. BrahMos missiles are in operation in the Indian Army, Navy and Air Force. The BrahMos is the world’s fastest supersonic missile. It can explode at 3 times the speed of sound.

The speed and range of BrahMos missiles are constantly being improved. Last held in March 2017 BrahMos missile 450 km during the test. Jumped into the distance and struck and destroyed the target. Next step BrahMos missile The flow distance is 800 km. Is planned to increase.

The Defense Research and Development Organization (DRDO) yesterday successfully tested an upgraded BrahMos missile capable of striking and destroying warships in this environment. From the Navy’s INS Visakhapatnam warship BrahMos missile Paid and hit and destroyed precisely the intended target.