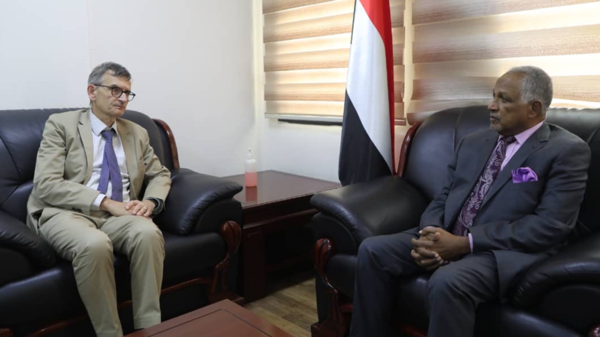 The Sudanese Ministry of Foreign Affairs summoned the UN envoy, Volker Perthes, and informed him of its rejection of his statements about the June 30 demonstrations expected tomorrow.

The Undersecretary of the Ministry of Foreign Affairs, Ambassador Dafallah Al-Haj Ali, said in a statement that the UN envoy’s statements were based on prejudices condemning law enforcement agencies, noting that they harm Sudan’s sovereignty and contradict its role as a facilitator of dialogue, according to what Al-Arabiya/Al-Hadath correspondent reported.

He also added that such statements are unacceptable because of their guardianship and prejudice to national sovereignty, stressing that the Government of Sudan respects the right to freedom of expression and peaceful demonstration, and that law enforcement authorities represented by the Public Prosecution and the police play their role in protecting lives and public property in accordance with their duties stipulated in the law.

Volcker had said in an interview with Al-Arabiya/Al-Hadath, which was broadcast today, Wednesday, that the consensus among the parties in the country has reached 80% on many political issues.

He added that the main point of contention between the two sides revolves around the levels of sovereignty and who represents it, and the issue of the military’s survival in the state’s governing institutions.

“Freedom and change are an essential component of the solution”

He also considered that “the June 8 dialogue was not balanced due to the absence of some political parties,” adding that “all parties have now accepted to deal with the tripartite mechanism that includes the United Nations, the African Union and the Intergovernmental Authority on Development in East Africa – IGAD, except for the Communist Party.”

He stressed that freedom and change are an essential component of the solution, but it is not sufficient.

He also considered that “those who staged the coup are part of the problem and must be part of the solution,” as he put it, in reference to the military component.

With regard to the demonstrations, he stressed the need not to provoke the security forces and not to use violence against the demonstrators at the same time.

The tripartite mechanism launched on the eighth of last June an official round of direct dialogue between all the parties, in order to reach a solution that ends the political impasse in the country, with the next round to be held on June 12, but it was later postponed indefinitely. Although a delegation from the Forces of Freedom and Change – the Central Council (one of the main civilian components in the country) met on the ninth of June with a military delegation, in the first meeting of its kind since the fall of last year 2021, what was known as the “Thursday meeting”, and it was considered a step Towards re-communicating between the two parties, and progress in the chapters of dialogue.

From the demonstrations of Sudan – Khartoum

But “Freedom and Change” has reiterated that it still rejects the participation of the military in governance, and demands the cancellation of all the exceptional measures imposed by the Sudanese army last year, despite the continuing dialogue between it and the military component.

It is noteworthy that the country has been living since October 25 of last year, a political crisis between the civilian and military component, which led to the dissolution of the government and the imposition of a state of emergency.