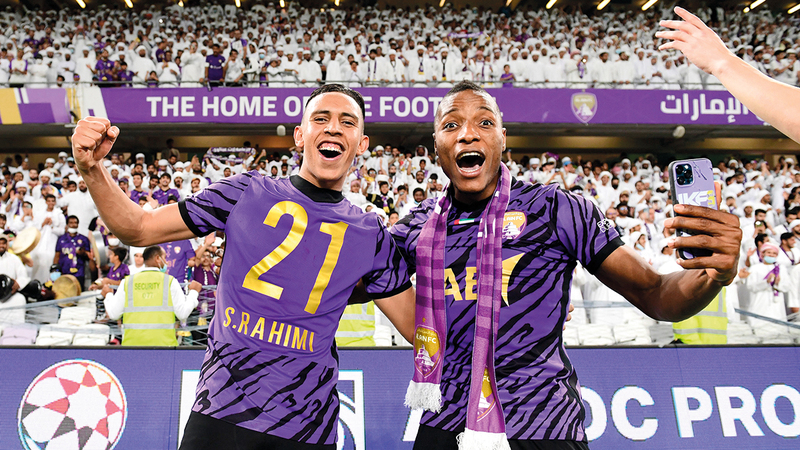 Sufian Rahimi appeared on the phone, accompanied by Laba Kodjo, after the Al Ain team won the 14th title of the ADNOC Professional League yesterday evening at Hazza Bin Zayed Stadium in Al Ain Club, and after winning the 23rd round match on Al Jazira 5-0.

Rahimi told “Emirates Today” that he received a call from the Chairman of the Board of Directors of Al Ain Club Investment Company, Mohammed bin Thaloub Al-Dari, who conveyed to them a personal congratulations from His Highness Sheikh Hazza bin Zayed Al Nahyan, on the distinguished season that Al Ain fought and crowned the league title, and accepted it with the Cup The League, where he has three rounds in the league, will not change anything after winning the title following the victory over Al-Jazira.

Rahimi had moved to Al Ain at the beginning of the current season, coming from Morocco’s Raja Casablanca, with a contract that extends until 2025.

Rahimi, 25, confirmed that “the congratulations he received from His Highness Sheikh Hazza bin Zayed Al Nahyan, means a lot to him, and that he feels overwhelming joy for the attention that all Al Ain players enjoy from His Highness, and that they will continue to work to achieve more titles in the years to come.” coming.”

The Moroccan player thanked the management of Al Ain Football Company for the unlimited support it provided to all players throughout the season, which confirmed that it resulted in the team achieving the ADNOC League title and the Professional League Cup. Team fans.

• Rahimi and Lapa Kodjo, along with the rest of their colleagues, contributed greatly in crowning Al Ain with the 14th Shield.