“Super Codjo” is historical with the blink of an eye 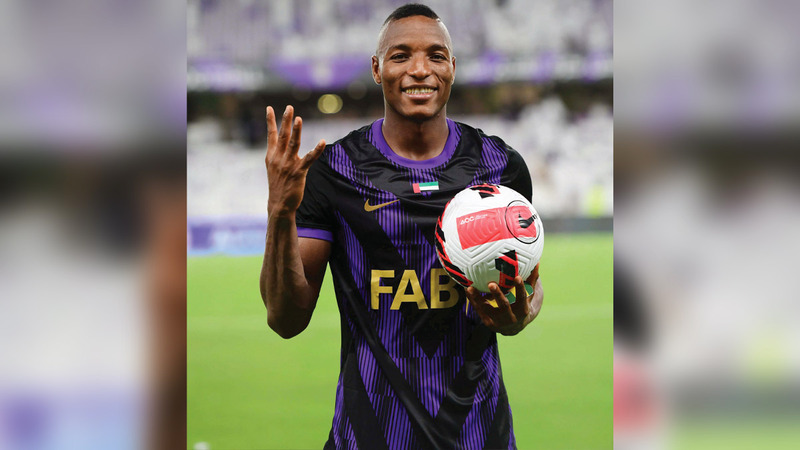 A statistic issued by the Professional Football League revealed that the “Super Hattrick” quartet scored by Al Ain striker, Togolese international Laba Kodjo, against Al Dhafra nets, in the second round of the ADNOC Professional League, is the fastest in the history of “Al-Zaeem” participation out of three quartiles. Another, as it was completed after only 68 minutes from the start of the match, and that the time difference between the first and fourth goal was only 57 minutes.

The statistic showed that the quartet helped the Togolese striker to be at the top of the list of players who scored the most “Super Hattrick” in the history of all clubs in professionalism, which he previously shared with both Al-Wasl player Fabio Lima, and the former Brazilian youth player Al-Ahly player Grafitti with two quads for each player, before To end the partnership by scoring his third quartet, while Al Wahda player Sebastian Tigali retains being the only one to score five “Mega Hattrick” goals so far.

The statistic indicated that striker Laba Kodjo started scoring his goals from the 11th minute, which is the fastest goal scored by the Ainawi player during his four-way record, and concluded his goals in the 68th minute, and that the second fastest “Super Hattrick” bears the same player’s name, and he was in the net of Al Jazira team last season. Within the 23rd round, when he cut his goals bar in the 14th minute, and finished them in 71st, he needed 56 minutes.

It was remarkable that the third fastest “Super Hattrick” was also registered in the name of the same player, and scored it against the Fujairah team in the fifth round of the 2019-2020 season, and at that time he scored the net in 42, and concluded the quartet in the 87th minute, and it took 45 minutes, while the first “Super” A hat-trick” in the history of Al Ain signed by the Swedish international Marcus Berg against the Al Dhafra team, in the 22nd round of the 2017/2018 season, and it began in the 25th minute, and ended in 87, lasting 62 minutes.

Al-Ain team player, Laba Kudjo, expressed his happiness for scoring his third quartet with the team, stressing that it gives him and his team a great defense to prepare for what is to come, noting that the instructions of his team coach, Ukrainian Sergei Rebrov, were clear about the need to register early in the match, which is what He helped them achieve the big result that ended the confrontation, and enabled him on a personal level to score four. He said in press statements that scoring goals is his mission, so he always seeks to implement what the coach asks for, and that he must give everything he has in all matches in order to help the team with the rest of his colleagues to achieve victories, explaining that every match the team plays in all competitions they take seriously. Grandpa, with the aim of achieving victory, and that there is no difference between one match and another.

The player who won the Golden Boot last season refused to describe his four-way record against Al Dhafra as a warning to the rest of the league teams, and said that it only gives him and the rest of his teammates enthusiasm, and concluded: “We always talk about the importance of each match separately, we have won over Al Dhafra, and we are facing a strong match against The island, and we enter it with the same motives.”

Only players in the history of all clubs made their mark by scoring four.