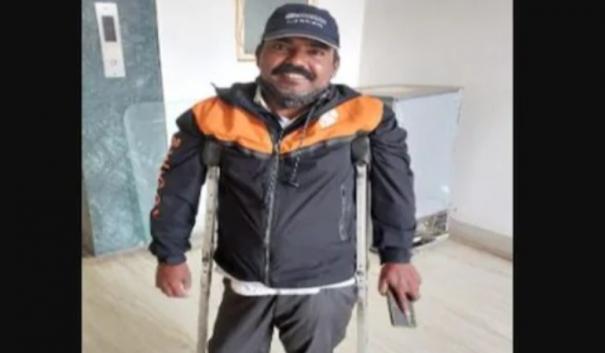 Bangalore: A post of a differently-abled person delivering food in heavy rain in Bengaluru has gone viral on social media. Many people are praising and supporting him.

Rohit Kumar Singh, a resident of Bengaluru, Karnataka, has said on his social media page:

Last Sunday when it was raining heavily in Bengaluru, I ordered food through a mobile app. But the food was delayed so I called the delivery man. He who said he would come in 10 minutes, came a little late. When I opened the door in anger, I was in for a shock. The delivery man was drenched in rain and standing with the help of crutches. Seeing him, all my anger went away. I gave him a speech while receiving food. I inquired about him.

The replacement’s name is Krishnappa Rathod. He is over 40 years old and has 3 children. He lost his job during the Corona pandemic and is currently supporting his family by delivering food. He keeps running in rain, sun and traffic. He said that he could earn some money by delivering food non-stop from morning to midnight. As the next order arrived while he was talking to me, he drove the cart in the rain without expecting my thanks.”

After the post went viral on social media, many people came forward to sponsor Krishnappa Rathod. 3 people have offered him a job in their company. Many people are appreciating his work.