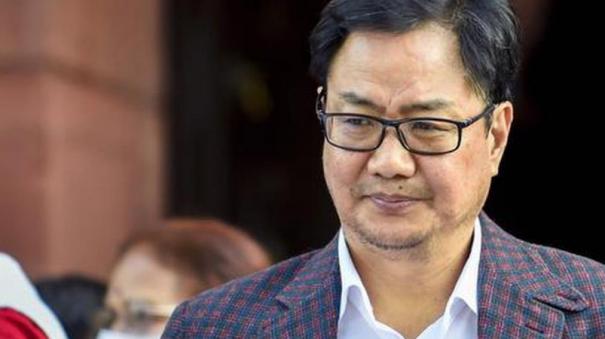 Union Law Minister Kiran Rijiju has said that he does not want to comment on the recent Supreme Court condemnation of Nupur Sharma’s speech.

Delhi BJP Spokesperson Nubur Sharma has been sacked from the party for making controversial comments about Prophet Muhammad. Meanwhile, cases were filed in various states demanding action against Nubur Sharma. Nubur Sharma filed a petition in the Supreme Court to transfer all these cases to Delhi for trial.

The hearing on his plea came before a bench comprising Justices Suriyakanth and JP Parthiwala of the Supreme Court. Judge Suryakant, who heard the petition, strongly condemned Nubur Sharma. And “Nubur Sharma has set the nation on fire with his irresponsible speech. Nubur Sharma’s irresponsible speech was responsible for the murder in Udaipur. Due to his activities, the situation in the country has become what it is today.

His televised debate is reprehensible. How can Nubur Sharma speak out about a case pending in court?

The country has suffered huge losses due to his irresponsible speech. Why hasn’t he been arrested yet?” He was also questioning.

Union Minister Kiran Rijiju was asked about the opinion of the Supreme Court in this situation.

Responding to this to a private news agency, Law Minister Kiran Rijiju said, “First of all, as a law minister, it is not the right way to comment on the opinion of the Supreme Court. Also, this is just a verbal opinion, not a judgment.

Although I do not agree with the verdict, I do not want to comment on it. We will discuss this issue at the right place,” he said