Surprise .. Zamalek decides the fate of Muhammad Abu Jabal and Tariq Hamed once and for all 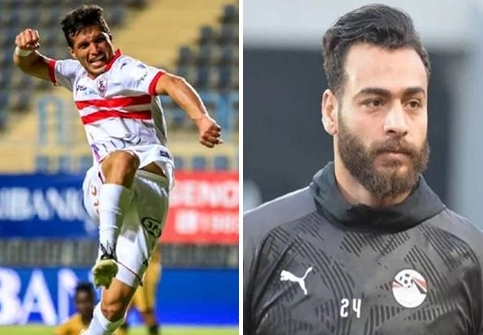 The Egyptian Zamalek team determined the final position of the trio of team Ashraf bin Sharqi, Tariq Hamed and Muhammad Abu Jabal during the coming period, to continue with the team, after a long period of negotiations and lack of commitment on their part, through a statement by the general supervisor of the football sector in Zamalek, Amir Mortada Mansour.

Amir Mortada said in statements published by Egyptian media: “The renewal of Muhammad Abu Jabal and Tariq Hamed, Ashraf bin Sharqi, continues with Zamalek until August 30, like the rest of the professionals. Negotiations began with him in November, and he submitted the answer to the dues in January.”

And the general supervisor of the football sector continued: “Tariq Hamed lasted 50 days outside Egypt and returned again with a handwritten paper with no seals on it, and there are no medical papers, he will be subject to investigation, and among the reasons for the investigation is knowing why he received 3 warnings in 8 matches. And they were worthless warnings after returning to the videos, in order to get a leave in the downtime period for a week and we allowed him, then the week became 52 days.”

Amir Mortada Mansour resolved the players’ position, as he confirmed that the club’s management closed the players’ file, and the renewal of Muhammad Abu Jabal and Tariq Hamed would not be done, even if it was “for free”, as he put it.