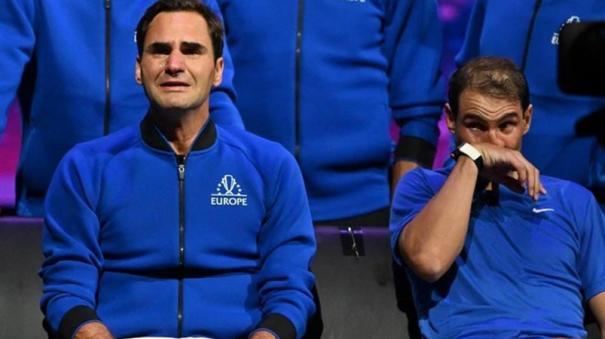 Switzerland’s Roger Federer, flag bearer of the tennis empire, retired in tears in his last match.

The Laver Cup tennis series is being held at the O2 Arena in London, England. Roger Federer played with Spain’s Rafael Nadal in the doubles match yesterday. The pair of Federer and Nadal, who played for the European team, faced the world team’s American Jack Chock and Frances Thiapojodi.

Federer has not played in any competition for the past 14 months after undergoing knee surgery. Everyone was excited to see how his game would turn out. Federer started the match brilliantly amid high expectations. Although he was unable to act quickly at full speed, the tennis racket was as sharp as ever. He helped win the first set 6-4 with his forehand. However, Federer and Nadal lost the 2nd set 6-7.

The end of Federer’s illustrious tennis career went to a tiebreak at the end of the second set to decide victory. Despite having a match point at 9-8 on Federer’s serve, their defeat was inevitable. In the end, Federer and Nadal lost 6-4, 6-7, 9-11 in this match.

Roger Federer’s division was followed by a ceremony. There were many emotional moments. At first, Federer shed tears. After this, Nadal, who was near him, also started crying. The two famous players sitting side by side and crying made the fans very emotional.

Federer said, “My wife Mirka would have stopped me from playing tennis a long time ago. But Mirka didn’t do it. Looking back now, it’s amazing. Thanks to him. Playing in the same team with Rafael Nadal was great. Thank you to all the players who played here, the fans and the legends who came to watch the match,” he said.

Rafael Nadal says, “Roger Federer leaving tennis feels like an important part of my life is leaving. Because he has been next to me or in front of me in important moments of my life. This is why I got emotional. It’s hard to describe, but it’s an amazing moment,” he said.

The last match of his tennis career was not a fitting farewell for Federer. However, at the age of 41, he has completely completed his tennis career and has left. Federer said, “When I stood on the field I was reminded of how wonderful it was to play again. This is not the end, life goes on,” he said.

Federer has mastered some of the greatest matches the world of tennis has ever seen. Even though Federer has retired from tennis, his presence will be felt for a while. Many players have tried to learn from Federer’s tactics, and his influence on other players is undeniable. But there will be no one like him.

Federer has won 20 Grand Slam titles including 8 Wimbledon, 6 Australian Open, 5 US Open and 1 French Open. Federer underwent knee surgery in 2021. But he has retired from tennis as it is not possible to fully recover from the injury. He completed his tennis journey by playing alongside Nadal, who had challenged him for many years.