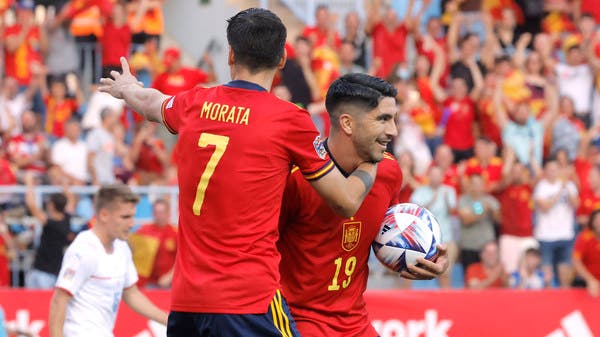 Spain took advantage of Portugal’s 1-0 defeat against Switzerland and took the lead after winning 2-0 at its guest of the Czech Republic on Sunday, in the fourth round of Group B for the first level of the European Football Championship.

And the La Roja team raised its score to 8 points in the lead against the second Portugal (7), compared to four for the Czech Republic and three for Switzerland, which won its first points after three defeats.

The Spanish national team, runner-up in the last edition last year, won its first victory in the last round by beating Switzerland after two draws in its first two matches against Portugal (1-1) and the Czech Republic (2-2).

Spain, the 2010 world champion, achieved its fifth victory in seven matches against Switzerland, with two draws and without any loss.

After four matches in the current window within two weeks, which concludes on Tuesday, the teams return in September, with the finals (semi-finals, third and final) to be held in June 2023.

It is noteworthy that the teams that top the four groups qualify for the finals to be held in the territory of one of those teams.

These matches also constitute an important preparation for the 2022 World Cup in Qatar at the end of the year, noting that Spain signed with Germany and Japan in addition to Costa Rica or New Zealand in Group E.

At the “La Rosaleda” stadium, after Spain took possession without any danger, the first threat came from the guests first through a powerful, creeping shot from outside the area by Vaclav Cherny, which was pushed away by Simon (18), and then another for striker Jan Kosta, who received the ball from a rebound and penetrated To the left side inside the area, a strong shot was taken by the goalkeeper to a corner (20).

Spain scored the first goal of the only shot on the goal in the first half, when Koki raised a beautiful ball from behind the defenders to Marco Asensio inside the area on the right flank.

The second half did not witness many chances before substitute Alex Krall’s shot, Simon turned it into a corner (67).

About ten minutes after he came on as a substitute, Gavi hit the first Spain ball on the goal in the second half, which was saved by goalkeeper Alice Manodos (70).

Three substitutes cooperated in the second goal when the promising Gavi launched in the middle of the field after an individual effort and passed to Dani Olmo and from him to the substitute Ferran Torres on the right side in the area, and from him a cross to Pablo Sarabia towards the second post, which scored three minutes after his descent (75).

In Geneva, Switzerland avenged its harsh loss in the first leg against Portugal 0-4 last week in Lisbon and beat it in the absence of the latter’s star Cristiano Ronaldo.

Ronaldo scored a double against Switzerland last week, boosting his score as the top scorer at the international level with 117 goals.

Switzerland owes the victory to its substitute goalkeeper Jonas Olmin, who excelled in defending his own goal and frustrated all the attempts of the Portuguese, especially in the second half.

It wasn’t 57 seconds before the start of the match until the owners of the land managed to open the scoring when Silvan Wiedmer passed a cross inside the area, and Seferovic’s goalkeeper headed into the net of Portuguese goalkeeper Rui Patricio, raising his score to 25 international goals.

According to the “UEFA” website, Seferovic’s goal became the fastest ever in the history of the European Nations League. Seferovic also became the first Swiss player to score in the first minute for his country, since Allen Sutter in 1988.

The referee awarded a penalty kick in favor of Switzerland after a handball by Nuno Mendes inside the area, but he quickly retracted it after reviewing the VAR technique, for a foul on Andre Silva before touching the ball (13).

Then the referee canceled a goal for Portugal, the champions of the first edition in 2019, scored by Rafael Liao, the AC Milan player, with his head after a pass from Silva, due to the latter’s offside (18).

The Portuguese team put pressure at the beginning of the second half, and Silva fired a crawl, which was blocked by Switzerland goalkeeper Jonas Omlin (49).

Santos made two changes in order to activate the offensive front by involving Bernardo Silva and Diogo Jota instead of Liao and Vitina.

Seconds after his descent, Silva fired a powerful ball with his left from the outskirts of the area, which was tackled brilliantly by Omlin (62). Bruno Fernandes fired a direct free kick into the hands of the Swiss goalkeeper (67).

Omelin intervened again, saving his goal from a sure goal by substitute Gonçalo Guedich after a long forward pass (71), then thwarted the attempt of the veteran defender Pepe (79). It is noteworthy that Portugal signed with Ghana, Uruguay and South Korea in Group H in the World Cup.